NEWT to Bring Architecture to Life

With the help of a 19-story, 364-square-foot building, a new initiative in Miami seeks to answer that question and strike a balance among light, color and sound. 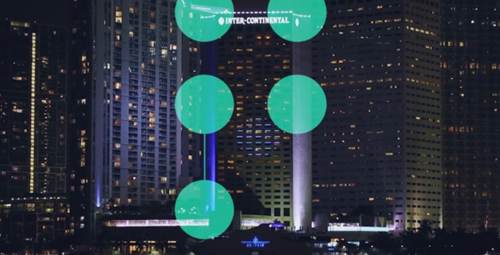 NEWT / Vimeo screenshot
From Nov. 10-15, people in the Miami area can watch and listen to Newt: Experiments in Light, Color & Sound. Those not in Miami also can listen to the music on web devices.

Newt Miami: Experiments in Light, Color & Sound (or NEWT for short) is a public art installation that will transform the LED wall of the InterContinental Hotel into a digital canvas of performing architecture, according to the initiative’s website.

From Nov. 10-15, visitors and residents throughout Miami can look across Biscayne Bay for rapid-motion animation on the hotel’s exterior walls, according to a Sept. 28 article in the Miami Herald. As the daily newspaper notes, the co-creators of the campaign—Dejha Carrington and Kelly Nunes—recently won The Miami Foundation’s Public Space Challenge.

The project itself will envelop three concepts to bring the architecture to life:

Light: Lookout points throughout Miami will give communities access to what the group calls a dynamic series of shapes and hues that will be screened on the hotel’s façade.

Color: Inspired by Isaac Newton’s theory that every primary color correlates to a musical note, NEWT will use colored lights in rapid animation with music.

Sound: Through integrated mobile technology, viewers can connect to a live-stream broadcast or synchronized music through smart phones or other web-enabled devices. This also will allow those who aren't in the Miami area to become part of the experience.

Sponsored in part by the Awesome Foundation and the Miami Downtown Development Authority, NEWT also received more than $10,000 in a kickstarter campaign.