With several researchers experimenting over the past few years with self-healing concrete methods, a company in the United Kingdom is being recognized for leading the way in testing how well those methods work.

Costain Group PLC has been nominated for Sustainable Business of the Year 2015, part of the Sustain Wales Awards, for its pioneering work in testing the self-healing concrete. The company and several news organizations recently announced the nomination.

The awards acknowledge individuals and organizations that are achieving sustainable development, according to the Sustain Wales website. The winners will be announced Nov. 19.

It’s the second time in a little more than a year that Costain has been recognized for its achievements in testing self-healing concrete. The company won a category award in the 2014 Celebration of Technology & Innovation (CEIT) awards in Huntington Beach, CA, for its role in bringing the self-healing concrete to the marketplace.

Costain is the lead industrial sponsor of a £1.6 million (US $2.47 million) Materials for Life collaborative project led by Cardiff University, according to a 2014 article in Construction Enquirer. Other researchers in the project come from Bath and Cambridge universities. Earlier this year, Costain began the first of a series of trials putting self-healing concrete to the test. 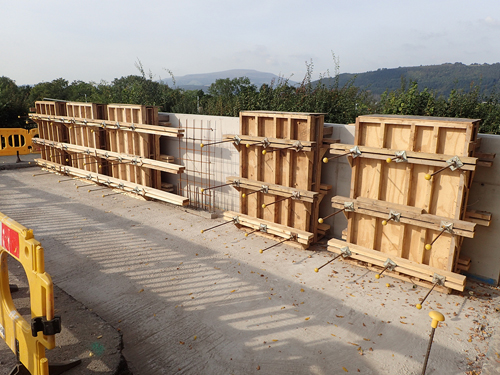 Costain Group PLC
The first trial, which is taking place at the A465 Heads of the Valleys highways improvement project in South Wales, is testing a number of self-healing concrete techniques.

The first trial, which is taking place at the A465 Heads of the Valleys highways improvement project in South Wales, is testing a number of self-healing concrete techniques that researchers are developing, according to an Oct. 12 article in Global Construction Review.

The trial structure consists of a replica retaining wall that has several trial panels, the magazine said. They will be loaded and stressed to artificially induce damage, and then will be monitored to see how well the self-healing concrete performs.

“From this trial we should gain an insight into the feasibility of constructing a full-scale structure with these techniques and their early-stage effects on structural properties,” said Oliver Teall, a Costain civil engineer who also is pursuing his Ph.D at Cardiff. “We’ll be looking at the effect of the healing techniques on areas such as stiffness, permeability and the mechanical damage recovery of the trial panels.”

Self-healing concrete methods use techniques to help resolve cracks as they form over time as a result of a number of factors, including steel rebar corrosion and pressure, Teall said in a 2013 company statement. Those include experimenting with shape memory polymers, calcite producing bacteria and microcapsules.

“Polymer tendons are incorporated into the concrete,” said Teall. “If a crack occurs, these tendons can currently be activated by either heat or an electrical supply. They then spring back to their original shape, compressing the concrete and closing the crack.

“Researchers at Bath and Cambridge will be looking at calcite-producing bacteria and microcapsules that contain healing agents respectively,” Teall continued. “The aim is to combine all three areas of research to create multi-scale damage immunity and pave the way for a new generation of construction materials.”

The researchers at Bath have said that their technique could reduce a lifetime cost of a structure by up to 50 percent, according to Global Construction Review. Those numbers could be significant because the U.K. alone spends about £46 billion (US $70.6 billion) on concrete repair and maintenance.

As the magazine explained, engineers often add additional steel to concrete—which is the world’s most-used building material—to reinforce it in an attempt to reduce cracking that could lead to corrosion of the steel needed to reinforce the concrete. But the extra steel adds to the cost without adding support value.

As previously reported, researchers in the U.K. are not the only ones attempting to develop self-healing concrete techniques. In May, a materials scientist at the Delft University of Technology’s Center for Materials announced his “bio-concrete” would reach the market this year.

In that case, Hendrik Marius Jonkers said he had been working on his development for more than a decade. The scientists on his team found limestone-producing bacteria, naturally occurring near volcanoes and high alkaline lakes, as ideal for the concrete repair job.

The bacteria consumes oxygen, and the soluble calcium lactate seals the cracks, he said.

A Korean team also announced that it had developed a self-healing microcapsule-type protective coating for cracks in concrete in 2012, according to a previous report.

Described as the first self-healing coating at the time, its developers at Yonsei University and Korea Conformity Laboratory in Korea said the coating was inexpensive, environmentally friendly and held the potential to self-repair the concrete.

Researchers said the spray-applied, hydrophobic coating contains microcapsules loaded with a urea-formaldehyde polymer material that seals cracks. When cracking occurs, the microcapsules are released. Sunshine then solidifies the sealant.

Teall said the trials Costain are running will take about 18 months to complete.