The Occupational Safety and Health Administration cited general contractor Arthur Funk & Sons Inc., of Lebanon, and subcontractor Weaver Construction and Roofing Inc., of East Earl, for willful and serious violations at the site of a new cancer center for Good Samaritan Hospital. 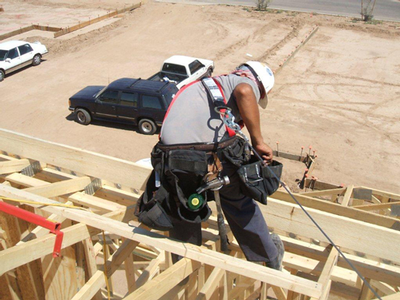 The case is not the first for either company.

OSHA cited Arthur Funk & Sons for fall hazards at the same hospital project in May, the agency noted. The previous violations and those currently issued are under contest.

“These companies are fully aware that fall protection is critical to saving lives, yet they continue to expose their employees to hazards that can lead to serious injury or death,” said Kevin Kilp, OSHA's area director in Harrisburg.

“Falls can be prevented and lives can be saved by planning ahead to get the job done safely, providing the right equipment, and training everyone to use the equipment safely.”

Falls are the leading source of OSHA citations and the leading cause of death in construction.

The latest case stems from an inspection conducted in July.

The OSHA compliance officer said he observed employees of both companies working without fall protection equipment and exposed to a 13-foot fall, prompting further investigation.

The workers had been installing a metal roof and flashing.

OSHA issued willful citations, carrying over $40,000 in proposed fines each, to both employers for an unprotected fall hazard of 10 to 13 feet.

OSHA alleged forklifts were used to support scaffold platforms, while the entire platform was not attached to the fork and the forklift was moved horizontally while the platform was occupied.

Arthur Funk & Sons is a family-owned business dating back to 1892, according to the company’s website.

The company completes commercial, institutional, religious, healthcare and other projects throughout Pennsylvania.

Weaver Construction and Roofing, founded in 1973, offers roofing, excavating, as well as construction management and design-build services throughout Pennsylvania, Maryland and New Jersey, .according to its website.

Neither company immediately responded Tuesday (Oct. 20) to requests for comment.

The one-story, 22,000-square-foot facility will house treatment services as well as physician offices, laboratories, a pharmacy and a spiritual center.

Designed by Beers and Hoffman Ltd., the center is set to open before the end of the year, according to the hospital website.