A mother and her two children were among those who escaped with only minor injuries after a water tank at a hospital construction site in Australia ruptured and sent a wall of water rushing toward their car.

According to the Sunshine Coast Daily, about 2.7 million liters (713,264 gallons) poured out of the tank late afternoon on Friday (Oct. 16). The water force was so strong that it swept one car off the road and damaged several others.

The tank is one of two that are on a construction site at Sunshine Coast Public University Hospital north of Brisbane, according to media reports. The second tank was being checked for structural integrity.

There was no word Friday about what might have caused the tank to give way.

Lou O’Brien, who was driving near the construction site with her 11-year-old twins when the tank ruptured, told ABC News that she lost control of her car as the water gushed from the tank.

A car swept off the road after water tank collapse at Kawana. Incredibly no one seriously injured. @WINNews_SCoast pic.twitter.com/XWgutGfrcj

“It just took us,” said O’Brien. “It was like a tsunami and I just told the kids to hang on.”

A spokeswoman for construction company Lend Lease told the Sunshine Coast Daily that the company officials were aware of the rupture and working with emergency crews.

“Safety is our number one priority,” the spokeswoman reportedly said. “We are currently working closely with emergency services.”

According to its website, the Australian-based construction company specializes in building and designing buildings and infrastructure, including hospitals, roads and bridges. The company has a global reach and employs 13,200 people around the world. 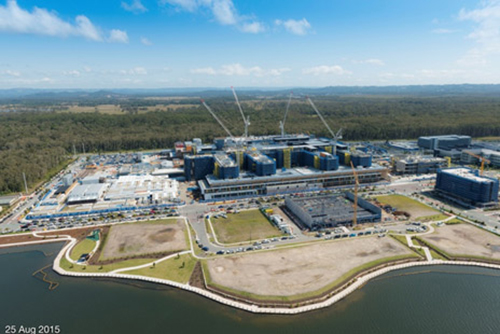 Lend Lease
The new Sunshine Coast Public Hospital is scheduled to open in 2016, with the project completed by 2021, according to construction company Lend Lease.

The company lists the hospital among its current projects. According to the Lend Lease website, the new hospital is scheduled to open in 2016 with the remainder of the facility completed by 2021. The AUS$1.8 billion (US$1.3 billion) hospital will have 768 beds and serve both as a teaching hospital and as a healthcare hub for Australia’s Sunshine Coast.

“Maybe that’s a defining moment showing the state government that they need to fix a problem they know is coming,” said Steve Dickson, who is a state member from Buderim. “We definitely need a really good road network for the hospital.

“I’m so pleased that no one has been seriously hurt but what happens if it is a serious matter and people need to get in [the hospital]?” the official continued.