Concerns about corrosion on the San Francisco-Oakland Bay Bridge have prompted a team of bridge professionals to ask for quick action to protect the main cable supporting the bridge.

After last week’s reports that the project’s lead designer feared rainwater exposure would lead to corrosion of the main cable, a panel of bridge maintenance experts have stepped forward to state that an “immediate retrofit” is in order, SFGate reported Tuesday (Oct. 13). 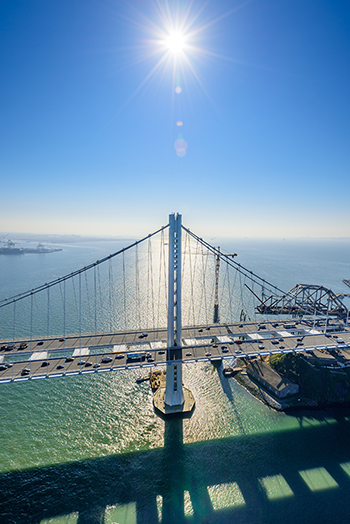 Photos: Caltrans
The Bay Bridge oversight committee and Caltrans have enlisted a panel of experts to contribute their analysis and input on the structure over the course of a year.

The Bay Bridge oversight committee and Caltrans had enlisted this panel of experts to contribute their analysis and input on the structure over the course of a year. It is this same team who reported on the corrosion of the tower rods as well.

Their attention is now on the integrity of the main cable, as well as maintenance access on the structure.

Made up of officials from the Golden Gate Bridge, the Bronx Whitestone Bridge, Hong Kong’s Tsing Ma Bridge and Scotland’s Forth Road Bridge, the experts point to corrosion that has occurred on bridges with similar cable structures to support their concerns.

“Cracks in wires and wire breaks have been found within the cables of a significant number of suspension bridges,” according to the panel.

“It would appear that there is now serious doubt on whether the traditional method of painting to provide protection to the main cables of these bridges is sufficient to provide a service life similar to the full design service life of the bridge.”

The experts suggest that the “conventional method” of utilizing corrosion-fighting coatings, applying a protective layer of paint and enclosing it in a steel jacket may not be effective on its own.

Other protection options include dispensing a corrosion-fighting oil into the enclosed cable or blowing air inside the cable.

The first approach would require the existing cable to be opened up along “much of its length” and is an expensive option, the panel says. The second is becoming a more popular method on new bridges.

According to reports, Caltrans had considered installing a system to blow air at a low pressure into the cable but decided it was too new and untested.

However, the maintenance experts say they are certain such a method would work and that it’s not too late to employ the air system.

“Unless there are overwhelming difficulties that prevent such a system from being fitted, it should be installed as soon as possible,” their report said.

The chair of the Bay Bridge oversight committee, Steve Heminger, indicated this dehumidification method would be discussed with Caltrans.

“Corrosion and cracking is what you look for on every bridge, not just the Bay Bridge,” Caltrans said in a statement reported by SFGate. “We are employing some dehumidification, and if more is warranted we will address that.”

Reports indicate the cost for such an installation would run in the tens of millions of dollars. Bay Bridge officials have access to a pool of maintenance money available to state-owned toll bridges, but here, too, the toll-payers are likely to absorb some portion of the cost.

Of additional concern to the maintenance panel, the structural design itself is likely to hamper inspection and maintenance efforts. “Many crucial areas are all but inaccessible,” according to SFGate.

The following areas have been cited in the experts’ report:

Caltrans doesn’t argue the difficulties posed by the bridge design. “It’s no secret that there are access challenges to this bridge,” it said in its statement. “That won’t stop us from protecting it. We’re open to considering any suggestion in the report.”