Corrosion on the new Oakland-San Francisco Bay Bridge has been a topic of consideration for quite some time, but while focus has been on tower rods, a new area of the bridge has been singled out.

Attention is turning now to the cable that holds up the eastern span of the two-year-old bridge. 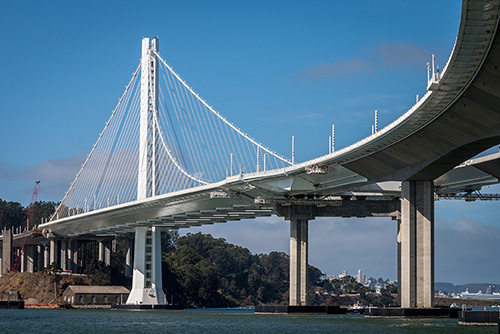 Photos: Caltrans
Another potential for corrosion has been cited on the new Bay Bridge. Attention is turning now to the cable that holds up the eastern span of the two-year-old bridge.

According to Nader, if rainwater collects in the 90- by 120 by 25-foot steel boxes where the cable is anchored, the cable is at risk of corroding at its base unless some action is taken.

“Anything that reduces the load carrying of those cables decreases the durability of the design, reduces safety factors and reduces the service life,” he added.

T.Y. Lin International is the engineering and design firm responsible for designing the new Bay Bridge.

Nader notified the transportation department of his concerns in July, but the meeting minutes have only recently been released.

The main cable of the Self-Anchored Suspension span is protected by a “steel jacket” everywhere but in the anchorages, where the 137 steel strands spread out and are exposed, making them susceptible to the elements and, potentially, ultimately threatening the strength of the structure.

The protective zinc coating on the strands appears to have worn, and rust has already appeared on some of the steel strands in the cable, sfist.com reported.

“The rust is proof the zinc coating is gone,” Berkeley engineer Lisa Fulton said after examining photos taken last year. “There is active corrosion, and the source is hydrogen from the marine atmosphere or standing water."

Caltrans believes that the leakage is a result of a design flaw in the guardrail: holes drilled into and through the deck to affix the guardrails are allowing rainwater to infiltrate the hollow space where the cable is anchored.

While this appears to be an active source of leaks, the problem may also go back to the construction stage itself.

According to the meeting minutes, Caltrans conceded that the hollow deck where the anchorages are situated, which was to be sealed from the elements, was left open for the construction period spanning December 2011 to December 2012.

A warning about the possibility of corrosion as a result of this exposure was raised in a May 2012 memo.

“Water is entering and ponding in the interior,” Caltrans senior bridge engineer wrote in his message to Tony Anziano, then the head of Caltrans’ toll bridge program.

“To prevent corrosion of the bridge interior, water intrusion and ponding must be reduced and/or eliminated,” Schram added.

If the source of the problem is established to be a design or construction flaw, the state would be able to seek penalties from the contractors, the Sacramento Bee reported.

However, if Caltrans’ actions are found to be responsible, the costs would likely be passed on to commuters via an increase in tolls, a solution already under consideration to pay for other corrosion-related repairs.

Caltrans is waiting for a period of heavy rains to fully inspect the effects of the water leakage, sfist.com reported, allowing the department to identify all of the areas where water is getting in.

However, Caltrans officials are reported to believe dehumidification can deal with any amount of rainwater entering the anchor area.

While each anchorage is equipped with a dehumidifier, Nader says the equipment is not sufficient for the amount of water it contends with.

According to the minutes, Nader told Caltrans officials: “The dehumidification is not effective if rainwater is allowed to seep into the east anchorage.”

Caltrans is reported to contend that there is no “active corrosion” on the bridge. Rather, it attributes any evidence as rust to steel shavings and grindings left on the site from the construction work.

Bay Bridge Resident Engineer Bill Casey told Bay Area news station KTVU that the zinc coating on all the metal surfaces inside the bridge is doing its job in protecting the steel from the leaks from the drill holes, referencing a white powder that forms when the zinc coating contacts water.

Addressing the holes from the guardrail installation, Casey said there have been no leaks where the bolts come through the deck, as the metal is held together “under great pressure.”

The leaks, he indicated, are coming from where some bolts connect to a flange above the road deck. The leaks could be addressed with a waterproof-coated metal placed on the areas where the bolts are not flush with the deck.

He also pointed out that water is planned for in bridge construction: “That's why you've got all these layers. You have the layers of the zinc-primed steel, the zinc-primed cables themselves and then the dehumidifier to really keep it dry in here,” he said.

“With proper maintenance, this bridge will last the test of time."

Casey downplayed the concerns on structural impact, indicating that when the leaks are stopped, it no longer remains a long-term problem.

"With no moisture in here, you don't really have corrosion,” he said. “So with that kind of low humidity you won't have corrosion over the long term."