In what it calls a failure of the operator to assess a pipeline threat in a timely manner, the regulatory agency that oversees pipeline safety has fined ExxonMobil $2.6 million for a 2013 spill in Arkansas.

The Pipeline and Hazardous Materials Safety Administration (PHMSA) sent the oil company notice of its findings on Oct. 1. The 46-page final order wrapped up a two-year investigation after 5,000 barrels of oil coated a residential neighborhood in Mayflower, AR, in March 2013. 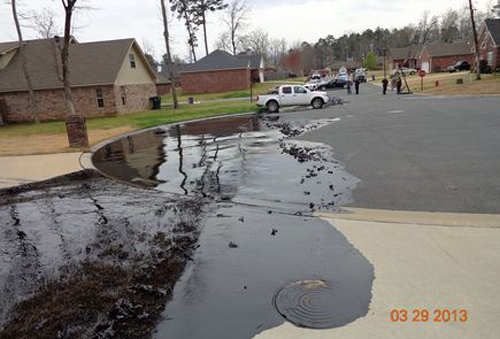 Photos: U.S. Environmental Protection Agency
PHMSA has fined ExxonMobil $2.6 million for a 2013 spill from its Pegasus line, which coated a residential neighborhood in Arkansas.

The parent company responded with a one-sentence statement to the Arkansas Democrat-Gazette.

“ExxonMobil Pipeline Company has received and is evaluating its options with respect to PHMSA’s final order for the 2013 Mayflower incident,” the company wrote.

ExxonMobil has 20 days to pay the fine or petition the agency to reconsider its findings. The fines in final order are $28,800 less than PHMSA first proposed in November 2013, according to the daily newspaper.

On March 29, 2013, the northern section of the Pegasus pipeline cracked open between two houses in the Northwoods subdivision of Mayflower not far from Lake Conway. Both the agency’s report and the daily newspaper indicate that 22 homes were evacuated during the spill, but no one was injured and the drinking water in the lake was never compromised.

Most of the pipeline, which runs from Patoka, IL, to Nederland, TX, was shut down within 16 minutes of the company’s alarm system detecting the spill and has never reopened, according to the agency’s order. The section of the pipeline that leaked is the oldest section of the Pegasus line and was built between 1947 and 1948.

In the aftermath of the 2013 spill, a metallurgical lab determined the cause of the failure “resulted because of the reduction of the wall thickness in the upset zone of the Electric Resistance Weld (ERW) seam caused by the presence of manufacturing defects.”

The Office of Pipeline Safety (OPS) then issued its findings in October 2013, according to the final order. In it, the OPS said the cause of the failure was a result of manufacturing defects, but that ExxonMobil had incorrectly determined that the pipeline was not susceptible to seam failure and used an incorrect testing method to evaluate it.

PHMSA said it concluded that had the company used a correct method, the pipeline rupture would have been caught sooner. But because it did not, the company “failed to assess the pipeline with a method capable of addressing that specific threat within the prescribed regulatory timeframes”

In its final order, PHMSA cited ExxonMobil for violating those regulations. It said the company did not:

According to the Democrat-Gazette, about 13 miles of the pipeline lies within the Lake Maumelle watershed. The watershed supplies drinking water to approximately 400,000 residents. Central Arkansas Water has urged ExxonMobil to move the line if it ever starts it up.

In the order, ExxonMobil had said previously that it had complied with pipeline safety regulations and that a pipeline accident was not a reason for its fines.