The first all-black racing yacht has just hit the water, and it’s the heat-reflecting properties of the pigments in the coatings that make it possible.

The development was announced Tuesday (Oct. 6) in a statement from BASF, who developed the coating based on the functional pigments the company also manufactures.

While BASF acknowledges that black sails and black hulls are not an uncommon sight in the world of yachts, a deck structure that is all black is a rarity. 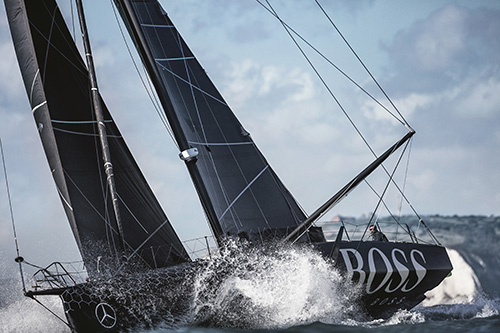 Photos by Mark Lloyd via BASF
Alex Thomson Racing’s new IMOCA 60 racing yacht, the first entirely black IMOCA 60 yacht in the world, was made possible by a coating based on functional pigments made by BASF.

This is because, as expected, the heavy sun exposure the boats are subjected to is likely to make dark surfaces heat up excessively, leading to uncomfortable conditions on board.

As the heat is absorbed on a dark-colored boat’s surface, the cabins below deck also accumulate the heat, making for unpleasant living conditions. This heat absorption could even affect the structural integrity of the composite materials, the company says.

However, the pigments in the formulation applied to the IMOCA 60 racing yacht helps these dark-painted surfaces remain significantly cooler on hot days as they reflect rather than absorb heat.

“The black coating of the deck has been made possible by the development of this coating technology based on functional pigments,” Arno Tuchbreiter, head of Pigment Marketing for Industrial Coatings at BASF, explained.

“Otherwise, the radiation of the sun would lead to an unbearable buildup of heat in the windowless cabin and the interior of the boat. The deck too would become too hot, and people would struggle to walk on it barefooted without getting burned.”

The ship builders used special pigments that are transparent for near infrared light (NIR) (sold under the Paliogen brand), as well as functional NIR-reflecting pigments (from the Sicopal range), as a solution to manage the effects of solar heat.

With their use, the dark deck surfaces are able to reflect a large part of the sunlight that they are exposed to. The sun’s rays penetrates the base coat while the filler below reflects the light and keeps the temperatures on the coated surfaces, as well as inside the boat, significantly lower than if conventional black pigments were used.

The pigments may have a future role in automotive coatings as well in addition to yachts and ships. Mercedes-Benz has been involved in the development and testing of the paint at BASF.

Martin Bremer, head of Color and Trim for Mercedes-Benz Design, says the car company has extensively tested the paint on its vehicles and found that the vehicle interior heats up considerably less, which leads to a reduced cooling requirement for air conditioning system.

This would lead to a positive effect on fuel consumption in countries with high average temperatures, at the same time reducing vehicles' CO2 emissions.

“Our intention is to use it on various models over the next few years,” he says.

The coating for the first entirely black IMOCA 60 yacht in the world was developed for the new racing yacht of fashion house HUGO BOSS.

The yacht, designed by the French company VPLP/Verdier, had its unique black aesthetical design created by Konstantin Grcic, a world famous industrial designer. Delivering on his creative vision, the yacht was launched in September 2015.

The Transat Jacques Vabre is a double-handed 5,000-mile race from France to Brazil, which begins on Oct. 25.