Coatings Give Marine Life the Slip

A technology company known for their work with super-repellant surfaces is turning its attention to the marine applications market. 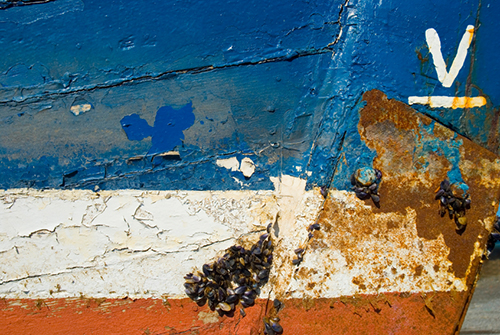 © iStock.com / Michael Westhoff
A technology company working on super-repellant surfaces is turning its attention to the marine applications market, thanks to a U.S. Department of Energy grant.

A federal grant will now enable the Cambridge, MA-based team to focus their attentions on further developing the technology for use in marine environments, the company announced Sept. 22.

SLIPS, which stands for Slippery Liquid-Infused Porous Surfaces, creates those surfaces to maintain a stable and immobilized thin liquid film on the surface, the company says.

This liquid over-layer is what allows a SLIPS surface to provide a true liquid-to-liquid interface and “feel” extremely slippery to marine fouling agents, for instance, so they can’t hold on to SLIPS, the company said.

SLIPS can be applied to any substrate, according to the company website, and used in a variety of industries.

For instance, SLIPS have been applied on optical components to prevent their fouling, on refrigeration coils to delay icing and accelerate de-icing to save energy, and on containers for a variety of products to insure zero loss upon discharge.

Initial field studies in marine environments show SLIPS to be a potentially effective alternative to the toxic copper-based anti-fouling paints and to the more expensive foul-release coatings, the company reports.

A new grant from the U.S. Department of Energy’s Advanced Research Projects Agency-Energy (ARPA-E) will enable the team of researchers from SLIPS and the Wyss Institute at Harvard University to work together to advance SLIPS materials for marine applications.

“We are happy that the government is on the same page with our team to solve challenging energy issues in the marine and shipping communities,” says Daniel Behr, CEO of SLIPS.

He says the company’s goal is to identify one or two target marine paint applications where SLIPS can secure market share, “most likely in collaboration with a strategic partner,” he adds.

This is an important area of research for the group as marine fouling can be responsible for several expensive problems: creating extra drag on ship hulls, which reduces fuel efficiency, which adds tens of billions of dollars in extra fuel costs and hundreds of millions of tons of additional CO2 emissions each year.

Even more costs are incurred when ships are dry-docked for their hulls to be scrubbed clean and painted with antifouling paints.

Almost all antifouling paints contain copper, which is toxic to many marine species and therefore under intense scrutiny globally by environmental agencies, the team says. A few environmentally friendlier foul-release coatings exist but are very expensive and offer limited effectiveness, it adds.

SLIPS Technologies Inc. makes fully slippery materials and coatings that solve sticky surface problems in industrial, medical and consumer applications. Its highly repellent surfaces can be created on any material to repel virtually all fluids and biological fouling agents.

The patented SLIPS portfolio of technologies was created at the Harvard John A. Paulson School of Engineering and Applied Sciences and the Wyss Institute for Biologically Inspired Engineering at Harvard University.

SLIPS opened a new field in materials science in 2011 that has been adopted by various research teams worldwide.

The marine coatings market is just one of several being targeted by SLIPS Technologies. The company is also working with customers who want to use its patented slippery materials to, for example, prevent biofouling on medical devices, reduce the stickiness of viscous liquids on surfaces and containers, and improve the efficiency of heat exchangers.