With a coating normally reserved for aircraft and an engine that is more powerful than 180 Formula One race cars, a supersonic car is going to try to make land speed history—with the help of AkzoNobel N.V.

The Amsterdam-based global supplier of coatings became involved in the project when the Bloodhound SSC team realized a conventional vehicle coating just would not do.

“We’re very happy to be involved with such an exciting project, which puts so much emphasis on science and technology,” said Conrad Keijzer, AkzoNobel’s executive committee member responsible for the company’s performance coatings group, in a statement released Monday (Sept. 28).

“Bloodhound is an outstanding technical achievement and the perfect way for us to showcase the performance capabilities of our products.”

According to the coating company’s statement, the Bloodhound can travel a mile in 3.6 seconds. Its wheels spin 170 times per second. And next year, its engineers will try to push land speed limits—with the hope of reaching 800 mph—in the South African desert. 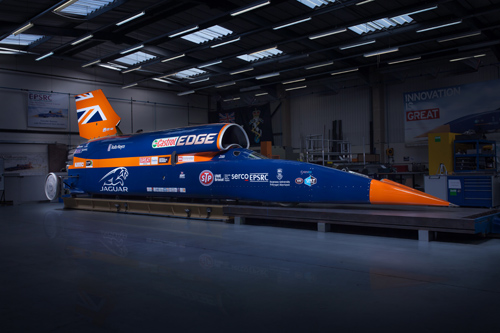 Photos courtesy AkzoNobel
AkzoNobel said the coating it chose came from its Eclipse range of exterior polyurethane topcoats. The company said the Eclipse line is traditionally reserved for commercial airplanes.

That would be a record-setting land speed. The current record is 763 miles per hour, and it was achieved in Nevada’s Black Rock Desert.

Andy Green was behind the wheel of the vehicle that holds the current land speed record, which he accomplished in 1997 with the Thrust SSC. Bloodhound will also use Green—a fighter pilot in the U.K.’s Royal Air Force who is noted as the first person to break the sound barrier on land—to try to reach the new record in Hakskeen Pan, Northern Cape, South Africa.

But that’s not the end goal of the rocket-powered vehicle, which looks more like a fighter jet than it does a car.

The Bloodhound team, which unveiled the car to 8,000 people last month in London, hopes the car will be the first vehicle to reach 1,000 mph while traveling on land.

Still, engineers are more than a year away from trying to reach the quadruple-digit mark in land speed, which will be a true test of just how well AkzoNobel’s aircraft coatings can fly.

Bloodhound’s coating is not its only impressive feature. The Bloodhound team has been working on the vehicle for eight years. During that time, its engineers said they have designed a vehicle with 135,000 horsepower that can go from 0-1,000 mph in 55 seconds.

Bloodhound generates twice the amount of heat found inside a volcano (3,000 degrees Celsius, or 5,432 degrees Fahrenheit) yet has a carbon footprint that’s equivalent to the gas produced by 4.1 lactating cows, its engineers said.

Meanwhile, all that power will take its toll not just on the coating surface, but on Green as well when he tries to pilot the vehicle to a new record. The Bloodhound produces 50,000 Gs and can be as loud as 180 decibels, its engineers said.