Artist Bernth Uhno will be allowed to keep the paint job that officials had ordered removed after saying the choice of a gradient color was not "Swedish."

The recent decision came from Östergötland’s administrative board, which said that the artist was not going to have to redecorate it after all, according to an article on The Local.

“Even though the coloration differs, it is not to the extent that it requires a redecoration,” said Anna-Maria Edlund, a spokeswoman for the board, in an interview with Sveriges Radio.

She said that the municipality of Mjölby did not feel it could force the artist to repaint his property under Swedish planning and building legislation, according to the recent article.

But in March, that’s exactly what the municipality told Uhno he would have to do.

As previously reported, Uhno purchased a home in Skänninge that had been vacant since 1981, according to Sweden Television station Östnytt and other media outlets. 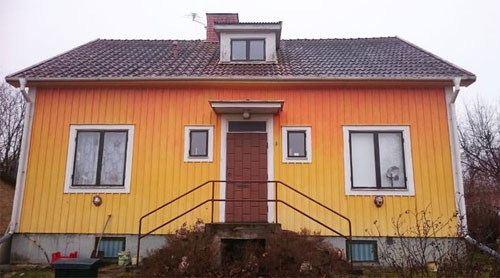 Photos: www.uhno.se
Bernth Uhno's multi-colored home sticks out in a Swedish village, officials said. But the artist will not have to repaint it as he previously had been ordered.

Uhno updated the home’s yellow, flaking exterior coating with a gradation paint job that goes from a light yellow at the foundation to a rich orange shade toward the roof.

However, the nature-inspired paint job prompted the municipality of Mjölby to order a repaint, calling the multi-colored home “foreign to the village of Skänninge,” reports said.

Further, the head of the local council’s building committee, Anders Steen, told the television station that the colors were not considered Swedish.

“In Sweden, we tend to stick to one color,” he said.

In ordering the repaint, the officials relied on Mjölby’s Planning and Building Act, which states, in part: “A building should have a good color effect.”

“Good color effect” is reportedly decided on a case-by-case basis. The owner can then appeal the decision with the Supreme Administrative Court, according to reports.

When Uhno was reordered to paint, many people voiced support for the colorful paint job via social media.

Others commented that the local politicians had “far too little to do.”

But even though commenters and the administraive board have seemed to agree with Uhno, his battle might not be over.

The Local reports that Mjölby officials who originally ordered the repaint have a chance to appeal the board's decision and take the case to Sweden’s Land and Environment court in Länsstyrelsen.