A final rule limiting workplace exposure to silica could be published as soon as January 2017, according to reports.

The proposed rule, with a foundation laid during the George W. Bush administration, has been a priority since 2009, when Obama first took office, Michaels added. 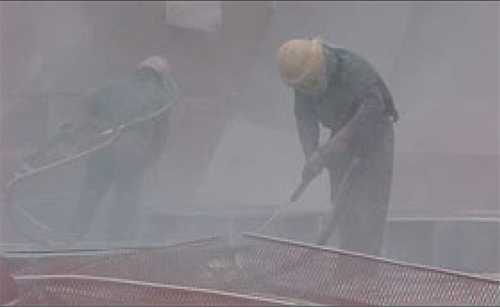 NIOSH
OSHA is targeting January 2017 as the deadline to release its comprehensive final rule on crystalline silica, according to reports.

More than 2 million American workers are currently exposed to respirable crystalline silica, according to OSHA. More than 640,000 are believed to be exposed to silica levels that exceed the current Permissible Exposure Limits.

Studies indicate that breathing in silica dust can lead to the debilitating and potentially fatal pulmonary disease silicosis, as well as lung cancer.

The Labor Department has been warning about the dangers of silica exposure since the 1930s. Pre-rule work began in the early 1970s and ramped up in the mid-1990s.

The proposed rulemaking includes two separate standards—one for general industry and maritime employment, and one for construction—that would have widespread impact on the industrial and commercial coating and abrasive-blasting industries.

The proposed rule would limit worker exposure to a Permissible Exposure Limit (PEL) of 50 micrograms of respirable crystalline silica per cubic meter of air, averaged over an eight-hour day—a sharp reduction from the current limits. The agency has also proposed an action level of 25 μg/m3, which would trigger the proposed rule’s exposure monitoring provisions.

Exposure monitoring is one of several ancillary provisions of the proposal. Other provisions include:

OSHA estimates that the proposed rule will save nearly 700 lives and prevent 1,600 new cases of silicosis per year, once the full effects of the rule are realized.

The agency says the proposal reflects "extensive review of scientific evidence relating to the health risks of exposure to respirable crystalline silica, analysis of the diverse industries where worker exposure to crystalline silica occurs, and robust outreach efforts to affected stakeholders."

Earlier this month, Bloomberg Business reported a comment made by U.S. Labor Secretary Tom Perez, who oversees OSHA, regarding a deadline for a finalized rule: “whenever you try to give a precise date, you always end up being wrong.”

The topic has been under examination for many years and has experienced frequent deadline extensions and delays.

In 2009, OSHA had announced July 2010 as the target for publishing its proposed regulation. However, a draft rule only made its way to the White House by February 2011.

At that point, it was to be in the hands of the Office of Management and Budget for a 90-day review period, but was held there for more than two years.

“The silica rule got caught up in a larger debate about regulations and the economy,” said Seth Harris, who was acting secretary of labor at that time.

He also told Bloomberg that the increasingly complex bureaucratic process contributed to the holdup as well, noting an always-growing list of steps OSHA must take each time it seeks to revise its regulations.

OSHA finally issued its proposal on new silica limits in August 2013, and the Proposed Rule on Occupational Exposure to Respirable Crystalline Silica was published in September 2013.

When the period for public comments opened, the deadline for written comments was December of that year. In that time, the American Cancer Society released a study demonstrating that American workers, including abrasive blasters and construction laborers, could benefit from the federal proposal to limit silica exposure on the job.

The comments period received several extensions that carried it through February. By that time, construction employers banded to urge the agency to withdraw the proposed rule. In February 2014, the Construction Industry Safety Coalition (CISC)—a group of 25 trade associations in the construction and demolition industries—submitted comments claiming that the proposal contained errors and inaccuracies.

Public hearings on the proposal opened in March 2014, at which the CISC testified. In August 2014, the group submitted a 119-page document identifying its objections to the rule in its post-hearing documents.

OSHA’s analysis of all post-hearing comments was scheduled to begin in June.

The former OSHA chief during the Bush administration told Bloomberg that though the system is “definitely a tedious process,” it ensures that a new standard is carefully considered and planned.

However, there are those who think that rather than developing a new regulation, attention should shift to ensuring compliance with the current regulation.

“There hasn’t been enough effort to help businesses comply with the rule as it currently stands.”

However, as a spokesman for the Association of General Contractors noted when the proposal was published, employers frequently flout the current limits.

The next threat, according to Bloomberg, is that President Obama may veto the Republicans’ proposed budget for the Department of Labor. It includes an amendment requiring additional studies on the topic before finalizing the rule, which some fear he might “negotiate away.”

Still, according to Celeste Monforton, a former OSHA legislative analyst: “If OSHA is unable to get out a rule on silica, something with such strong scientific evidence and completely feasible controls, then we can pretty much eliminate the notion that OSHA can get out regulations on any kind of health standard.”