Researchers at the U.S. Naval Research Laboratory (NRL) have been recognized for money-saving and performance advancements they made to nonskid and topside coatings used on the naval fleet.

A five-man team from the NRL Center for Corrosion Science and Engineering were awarded the Office of Naval Research Prize for Affordability in an August ceremony held in Alexandria, VA, the NRL announced.

The award recognizes the research team’s formulation, synthesis and commercialization of topside and nonskid coatings to deliver longer life, high durability, improved weathering resistance and color stability. The new coatings are intended to replace the legacy nonskid decking and topside coatings previously in use. 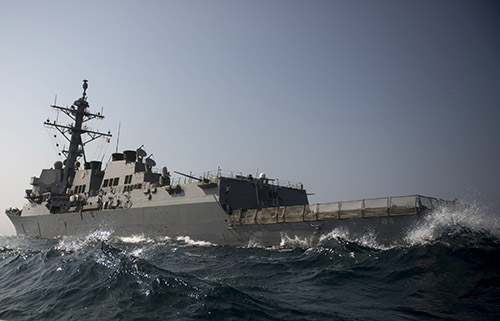 The group’s developments are credited with significantly reducing total costs related to corrosion control in Navy ships and submarines through the use of the new coating formulations.

The new NRL polysiloxane system is said to double or triple life expectancy of the coatings.

For topside coatings, the new system is reported to not only increase the coating's lifespan, but also to lower installation costs—by up to 28 percent—by reducing the number of coats needed when compared to conventional systems.

As a result, polysiloxane coatings systems have been qualified and approved for use by Naval Sea Systems Command (NAVSEA) and have been mandated for all topside depot level maintenance applications.

The NRL-developed polysiloxane nonskid decking system is planned for qualification this year.

On submarines, this system is the only one to ever pass the Navy submarine nonskid requirements.

The Center for Corrosion Science and Engineering (CCSE) conducts broad scientific and engineering programs to understand and reduce the effects of the marine environment on naval systems. Within the CCSE, the Marine Coatings Science Section conducts basic and applied research to synthesize and produce advanced, multifunctional marine coatings technology for all naval environments, including immersion, alternate immersion and atmospheric exposures typical of Navy and Marine Corps platforms.

The U.S. Naval Research Laboratory is the Navy's full-spectrum corporate laboratory, conducting a broadly based multidisciplinary program of scientific research and advanced technological development. The Laboratory, with a total complement of approximately 2,500 personnel, is located in southwest Washington, DC, with other major sites at the Stennis Space Center, MS, and Monterey, CA. NRL has served the Navy and the nation for over 90 years and continues to meet the complex technological challenges of today's world.