A St. Louis-based international architect has revealed its plans for a new NFL stadium in its hometown—even though no one is sure if the city will have a team to play there by the time it is built.

HOK released last week its renderings for the new $1 billion stadium, which is being planned for property on the north side of the city and next to the Mississippi River. The St. Louis NFL Stadium Task Force and the architect will show the NFL what they have in mind when the league meets next month. 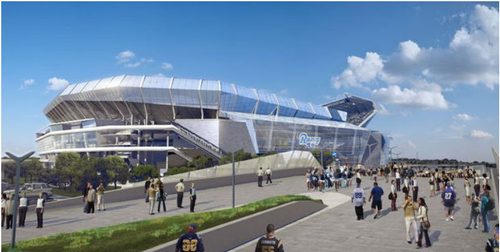 HOK / St. Louis NFL Stadium Task Force
HOK released last week its renderings for the new $1 billion stadium in St. Louis, which is being planned for property on the north side of the city and next to the Mississippi River.

According to the St. Louis Dispatch, the architect showed plans that would allow the stadium to be used for more than just football games, but with the average NFL fan in mind.

“This is what’s so cool,” said Eli Hoisington, HOK’s design principal, in an interview with the daily newspaper. “There’s a trend where everything is luxury, everything is suites now. And we put the general die-hard St. Louis fan front-and-center, embedded in the experience.”

Designing the stadium proved to be challenging because of the site, Hoisington said. Sunken railways made bridges to cross the tracks necessary; a sloping ground called for rain gardens; and water traffic on the country’s busiest river required sound and light screens to be placed overhead.

“It’s on the biggest river in the country,” the designer told the Dispatch. “You’ve got flood plain. You’ve got grade changes. But all of those things, from a design perspective, give us an opportunity to do things that are really, really extraordinary.”

Meanwhile, the designer said accomplishing all of that in a budget also was challenging. Not only did the firm have to stick to a budget for Missouri Gov. Jay Nixon’s task force, they had to present numbers the NFL would accept.

“We have to stand by a guaranteed price in about four weeks,” Hoisington said of the fall meeting. “We have to go in front of the NFL owners and say for that $1 billion price tag, we can build that. And we can.”

“I give HOK a ton of credit,” he said. “They understand the fabric of our city and the narrative of our city, and they’ve been able to incorporate that into the site itself. They get our market very well.”

Meanwhile, the St. Louis Business Journal noted that getting to this point in the project has been costly.

The business journal said total construction costs are projected to be $820 million. That’s before acquiring the land, which would add another $60 million. Another $118 million would be spent on design, professional fees and other costs.

The total cost would be $998 million, based on current estimates, the Journal said.

Financing would be achieved from multiple sources, the business media outlet said. St. Louis Regional Convention and Sports Complex Authority (RSA) would contribute $135 million in bond proceeds from the state and $66 million in bonds from the city.

The Missouri Development Finance Board (MDFB) approved $15 million in state tax credits for the project—a number that should increase to $50 million over the next three years, according to the business journal.

“Whether that’s through resolution of lawsuits or getting the vote from the MDFB or even just design development, all those milestones continue us down the path and make me more confident than I was when we started this in January,” Peacock told the business journal.

In reference to the lawsuits, Peacock was pointing to one of a few problems that the task force has yet to overcome: Not all are swayed.

“It doesn’t change my opinion on how they’re going to pay for it,” said state Sen. Rob Schaaf in an interview with the Dispatch.

Schaaf, who sued to stop the effort and recently began gathering legislators to block state funding for the project, said he does not believe the state has the authority to tax and finance the project the way it has.

“It’s not about the stadium,” the senator told the daily paper. “It’s about the rule of law and the process the governor has to go through to put the people in debt for hundreds of millions of dollars.”

What team might play there also is a concern. The owner of the St. Louis Rams, which is the city’s current NFL team, has said he wants to move his team back to the west coast. California served as a home for the Rams for years, although the team originated as the Cleveland Rams and is the only NFL team to win titles in three states.

Stan Kroenke has said he wants to move the Rams to Inglewood, CA. He proposed a nearly $2 billion stadium, according to Construction Drive.

Just days later, St. Louis officials responded with the project plan to keep the team where it is, the magazine said. That’s where the 64,000-seat stadium—which would replace the Edward Jones Dome that was built as the Trans World Dome about 20 years ago to lure a team back to St. Louis—originated.

The magazine also said that the St. Louis Building and Construction Trades Council said it would offer a permit for round-the-clock work on the stadium, which could save the city about $45 million. It would also allow the project to be completed in just two years.

As of now, the stadium crews would begin construction in February 2016 and wrap up in June 2019, according to the Dispatch.

Peacock told the Dispatch that the task force chose HOK because it’s one of the top stadium planners in the country. That includes the new Falcons stadium in Atlanta.

“And they’re in our backyard and they know our city well,” he told the daily paper.