Work on the new tunnel passing under Seattle’s waterfront, part of the Alaskan Way Viaduct replacement project, has halted as the “Bertha” tunneling boring machine is returned to its pit, but the activity surrounding the project continues.

KING 5 News in Seattle reported earlier this summer that work on the North Portal had continued, unaffected by Bertha’s breakdown, and was about two-thirds complete. 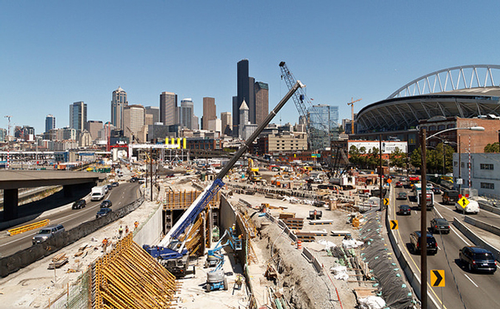 Photos: Washington State Department of Transportation
Despite a breakdown of the tunnel boring machine, work on ramps and roadways for the tunnel approach have been able to move forward.

Earlier this year, a rebar wall collapse injured five workers at work in this area.

At this time, most ramp and roadway work was completed, and, at the end of August, traffic would begin using a bridge and pavement built to lead into the new State Route 99 tunnel and become a new ramp leading into downtown Seattle.

In a follow-up report, King 5 explained that road closures would be in effect on SR 99 to allow for construction of the tunnel’s north portal. Construction crews will be working underneath the new bridge on additional ramps and roadways connecting to the new tunnel.

Likewise, Construction Equipment Guide indicated that work continues on the South Portal and the cut-and-cover tunnel that will connect the SR99 roadway to the tunnel.

In the meantime, a proposal has been pitched to build a mile-long elevated park on Seattle’s Waterfront, converting part of the existing Alaskan Way Viaduct into a “garden bridge” that would connect Pike Place Market and CenturyLink Field.

The City Council may allow residents to vote on the plan, although the city has been working on its own plan to build an “at-grade promenade” in the area once the viaduct is demolished at the cost of $400 million.

On its Initiative 123 site, the group supporting the bike and pedestrian bridge plan indicates that only a small portion “of architectural interest” of the viaduct would be utilized.

And addressing concerns about seismic safety, which prompted the replacement of the viaduct, I-123 assures residents that bridge engineers are being consulted to ensure safety of the bridge’s single-level, single-column design, and that the viaduct section would be retrofitted and designed to exceed current seismic safety standards.

According to Seattle’s Daily Journal of Commerce, the repaired drive unit was returned to the 120-foot-deep rescue pit on Monday (Aug. 24) after repairs were made to the cutter head, but reconstructing the machine’s front shield and reconnecting wires, hoses, cables and pipes will still take some months to accomplish.

Seattle Tunnel Partners, who won the $1.35-bilion design-build contract, expects to resume boring on Nov. 23, and tunneling would be complete in about one year.

The machine had been out of commission since December 2013, after dirt got into a bearing, having only dug 1,000 feet, the Puget Sound Business Journal reported.

KIRO TV reported Wednesday (Aug. 26) that insurance companies had become involved in a battle over Bertha’s repairs. They want to get off the hook of paying the $143 million in anticipated repair costs of a machine that cost $80 million to build. They claim that the design of machine was flawed.

The Puget Sound Business Journal had earlier indicated that Hitachi Zosen, who manufactured Bertha, would be held liable for the repairs because of the short distance it had covered in service. If it had tunneled a little farther, the Journal said, the state or Seattle Tunnel Partners would be responsible for repairs.

Most of the existing bridge deck has since been replaced with new roads and the viaduct itself will be replaced by the tunnel.

According to Construction Equipment Guide, the 1.7-mile-long tunnel will boast an inside diameter of 52 feet (15.8 meters), allowing it to hold the planned double-deck roadway.

Precast concrete liner segments—each weighing 3,800 pounds and measuring 6.5-feet in length—are used to form a “ring” in the tunnel behind the front end of the boring machine, the Guide reported.

Laura Newborn, media relations manager with Washington State Department of Transportation, told the Guide that 185 rings are in place to date, and nearly 14,500 will be needed to complete the job.

The replacement project is estimated to provide approximately 3,900 jobs.

The project is currently 27 months behind schedule but is expected to be complete in spring 2018.