The first of two arches has just been completed on Dallas’s Margaret McDermott Bridge, part of the $798-million Dallas Horseshoe Project that seeks to reduce traffic and enhance accessibility to downtown Dallas, Arch Daily reported Aug. 25.

Time-lapse footage shows the progress of the arch construction on the eastbound side of the bridge, as well as the final piece, the top of the arch, being lifted into place on Aug. 22. 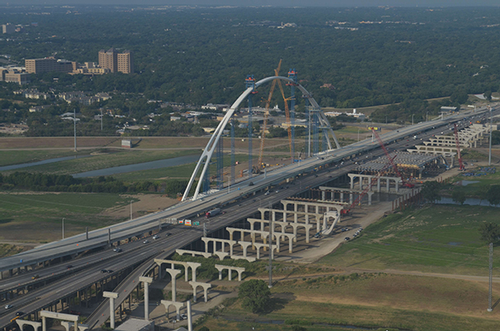 Drone’s-eye footage of the construction showed the progress that had been reached earlier this summer.

According to the bridge designer Santiago Calatrava Architects & Engineers website, the arch segments were fabricated by Tampa Steel Erecting in Tampa, FL, in 78 sections, some of which are up to 60 feet long.

Because of the fluid design, no two pieces are identical, and they must join together perfectly, the firm indicated.

"Some of the tolerances are to within an eighth of an inch, some to a sixteenth of an inch," Jeff Ames of Tampa Steel Erecting told NBC in Dallas-Fort Worth in 2014, before the sections were shipped.

He indicated that, in order to prevent any unexpected situations on site in Dallas, the connections for the sections were tested before they were transported from Tampa.

And the finishing touch they added was a coating of white paint formulated to last years in the Texas sun.

When completed, the arches will stand 328 feet tall and stretch the 1,311 feet of the bridge they support.

The arch on the westbound side will be complete at end of 2016, and the entire $113-million Margaret McDermott Bridge, which includes development of hiking and biking along each side of I-30, is slated to wrap up in summer 2017.

In a Calatrava news release, Dallas City Councilman Lee Kleiman said,"It's been a long process of getting the roadway in there and the arch in place…lifting these big sections of steel to create that arch."

Earlier this summer, she had the opportunity to put her signature on the structure in a bridge-signing ceremony attended by the architect and the media.

She and her husband, on their own and through their Eugene McDermott Foundation, have been very generous in donations to civic, cultural and educational endeavors at institutions in Dallas.

McDermott helped to fund construction of this bridge as well.

According to the Transportation Blog of the Dallas News, about $5 million of the bridge’s cost was raised by the Trinity Trust Foundation, of which she is a landmark sponsor and donor.

This nonprofit has raised more than $60 million in private funds for projects along or near the Trinity River, which the McDermott Bridge crosses. This included the town’s Margaret Hunt Hill Bridge, which extended the Woodall Rodgers Freeway across the river to West Dallas.

Calatrava, who made news in 2014 for making half a million dollars on the sale of his unsolicited design ideas for two large bridge projects, also designed the Hunt Hill Bridge, which was completed in 2012.

That cable-stayed bridge was the first vehicular bridge in America designed by Calatrava. It consists of 58 cables attached to the center of the deck and arches 400-feet tall.

The original design for the McDermott Bridge was deemed to expensive, NBC Dallas-Fort Worth reported when the project was green lighted.

Scope of the Project

According to Calatrava’s site, the Margaret McDermott Bridge is part of the Trinity River Corridor Project, which is meant to create a renewed recreational area, promote city infrastructure and unify riverfront districts.

This includes the creation of lakes, shores and forest trails to bring new life to the riverfront itself as well as the district it falls in. Access to the resources was an important consideration in the planning process.

The bridge serves this purpose by providing a safe, efficient transit crossing for drivers, cyclists and pedestrians of all ages and abilities.