A new federal proposal to reduce worker exposure to beryllium will not cover those who perform abrasive blasting, according to the Occupational Safety and Health Administration.

The model, which OSHA published Aug. 7 in the Federal Register, is unlike the one it has been considering for years.

“Occupational Exposure to Beryllium and Beryllium Compounds,” which has been long awaited, will not cover the construction or maritime industries. Instead, OSHA said an Aug. 6 statement and in its proposed rulemaking document that construction workers who use coal-slag, copper-slag or crushed glass abrasive blasting methods already are covered by other regulations that would protect them from beryllium exposure.

For example, abrasive blasters in the construction industry fall under the protection of the Ventilation standard (29 CFR 1926.57). 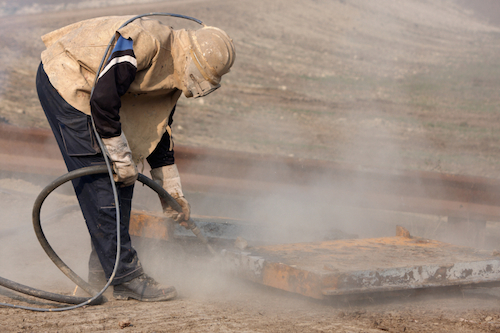 ©iStock.com / shime02
The Occupational Safety and Health Administration has published a new rulemaking proposal on beryllium, which would decrease the amount of the element to which some workers could be exposed.

The proposed rule also rejects, in part, a 2014 recommendation from OSHA’s own Advisory Committee on Construction Safety and Health (ACCSH), which stated that the construction industry should be included in the scope of the proposed rule reducing beryllium limits.

However, the agency has said it still is willing to hear what others have to say.

In its statement, OSHA officials said they would seek comments to determine whether workers who perform abrasive-blasting work—such as highway construction workers renovating bridges or shipyard employees clearing paint off a ship’s hull—should be covered by the final rule.

The public can make comments until Nov. 5 through Regulations.gov. Other methods, including via facsimile and by regular mail, are included within the publication and on OSHA’s Beryllium Rulemaking website.

The site also includes several OSHA-generated fact sheets and information sheets on beryllium health risks, on how to use the metal safely and on the changes outlined in the proposed rule.

The new rule has taken a long time to work out. OSHA initially tried to lower its current 8-hour Permissible Exposure Limit (PEL) on beryllium, which is 2 micrograms per cubic meter of air, in 1975.

But opposition—including from the U.S. secretaries of Energy and Defense—led to shelving those plans for several decades.

Instead, the agency has been enforcing its 1971 policies on beryllium as other federal agencies reduced their own limits. OSHA began the most recent rulemaking proposal in 2002 with a Request for Information.

It also adds other protections for workers exposed to beryllium. Those include additional personal protective equipment, medical exams, medical surveillance and worker training.

“This proposal will save lives and help thousands of workers stay healthy and be more productive on the job,” said U.S. Secretary of Labor Thomas E. Perez in the agency’s statement. “We’re pleased that industry has been such a strong voice in advocating for a more rigorous standard.

“The proposal is strong because of unprecedented partnership between manufacturers and the United Steelworkers,” he said.

Still, the agency has said it is willing to consider other options.

In its proposed rule, OSHA has said it wishes to enforce the first two of four alternatives its committee considered when discussing what to change in the current rule. The other two options—which would include the construction and maritime industries—might still be on the table.

Those four alternatives are:

Beryllium is a component of coal, certain rock materials, volcanic dust and soil used in industrial applications. Breathing air containing beryllium can deposit beryllium particles in the lungs, creating immune-system and respiratory risks. Beryllium is a known human carcinogen and can cause chronic lung disease.

A 1999 OSHA Safety and Health Bulletin warned of the hazards of workplace exposures to the chemical and said that the current standard of 2 micrograms per cubic meter of air for an 8-hour time-weighted average (TWA) may not be adequate to prevent chronic beryllium disease.

OSHA estimates that 23,000 workers in construction are “potentially exposed” to excessive levels of beryllium, putting them at risk of sensitization, chronic beryllium disease and lung cancer.

In 2012, the United States Steel Workers and other unions teamed up with Materion Brush Inc.—the largest producer of beryllium in the U.S.—to produce a draft text for a rule to lower the occupational PEL. The company also created an interactive website to help employers and workers use beryllium safely.

The coal-slag abrasive blasting industry would be “one of the most impacted groups” under the standard proposed by Materion.

SSPC, the society that represents the coatings industry, agrees. The group is seeking comments to send to OSHA regarding alternative 2a, which the group says is the alternative that would affect the coatings and abrasive blasting industries the most. SSPC asks its members to submit comments by Oct. 25.