The Dunfermline Press reported Aug. 18 that steps are being taken to ensure the same corrosion problems that were uncovered on the Forth Road Bridge don’t affect its replacement, the Queensferry Crossing.

The £1.4 billion (US $ 2.2 billion) bridge was requisitioned when corrosion found on the Forth Road Bridge’s main suspension cables raised questions about the safety and lifespan of the 50-year-old bridge in 2006. 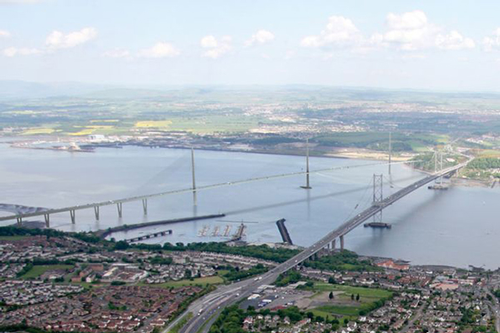 According to Transport Scotland, among the reliability features factored into the planning of the Crossing, were the latest, most durable materials; cables that can be replaced more easily than on the Forth Road Bridge; a dehumidification system inside the box girder to reduce moisture and prevent corrosion; and modern paint systems on the structure.

“The design of the Queensferry Crossing takes advantage of technological advances in the last 50 years to ensure the bridge remains a reliable crossing for many years to come” a spokesman for Transport Scotland told the Press.

“Cables can be replaced with more ease on a cable stayed bridge as opposed to a suspension bridge such as the Forth Road Bridge and can be done as part of normal maintenance works without restricting the bridge to traffic,” he explained.

“Dehumidification systems inside the box girders and towers will reduce moisture and corrosion, helping to maximise the lifespan of the bridge,” he added.

Monitoring units and software will be in place to deliver real-time readings on corrosion potential, rate, resistivity, temperature and humidity to engineers for maintenance needs, according to the Press.

It also reported that corrosion was halted on the Forth Road Bridge: to reduce the relative humidity of the affected areas, the main cables were wrapped in an airtight, waterproof sheath and very dry air was injected into the spaces between the wires.

A 2013 inspection indicated that the steps taken to resolve the corrosion were successful and the existing bridge did not need to be closed to traffic.

The Crossing is set to be the world’s longest three-tower cable-stayed bridge at 2.7 kilometres (1.7 miles), but more records are at play in its construction.

The Scotsman reported Aug. 13 that, at that point in construction, the three towers of the new bridge had reached 170 metres (558 feet) high. On completion, the towers will be 207 metres (680 feet) tall, surpassing the previous record height and making it the tallest bridge in the U.K.

Until this project, the tallest bridges in the U.K. were the Humber Bridge at 162 metres (531 feet), and the Forth Road Bridge, the structure which Queensferry Crossing replaces, at 157 metres (515 feet).

Shepherd Engineering Services indicated this project would provide a record in the company’s own history as well.

The Construction Index reported Aug. 19 that, to deliver the mechanical, electrical and plumbing services to the bridge, Shepherd is installing 120 prebuilt road deck sections on the bridge—its largest prefab installation yet.

Using its PRISM prefabrication facility, Shepherd will fully manufacture modules off site, providing cost and time savings to the project.

Shepherd regional director Colin Walker told The Construction Index that this approach not only maximized efficiencies, but would also “contribute to a reduction in the project’s logistical and on-site health and safety risks.

Earlier this year, a bad concrete pour slowed work on the bridge.

However, in a recent report from BBC News, Infrastructure Secretary Keith Brown indicated that the project was continuing to meet its milestones and is even coming in under budget, at about £1.35 billion (US $2.13 billion) to £1.4billion (US $2.2 billion).

"The project team have done a great job in mitigating the effects of the recent poor weather,” Brown told the BBC, “and it is pleasing to report that the project remains on schedule to be complete by the end of 2016."

According to Transport Scotland, 30,000 tonnes of steel and 150,000 tonnes of structural concrete will be used in this project to build the longest three tower cable-stayed bridge in the world.