IN Bridge Fix in Test Mode

A solution for an interstate bridge outside of Indianapolis, closed since the beginning of August, continues to be in the works.

The Indiana Department of Transportation (INDOT) is in the process of testing solutions to the Wildcat Creek Bridge on I-65 in Lafayette, IN, which has been closed since Aug. 7, when a bridge pier was discovered to have sunk 9 inches. 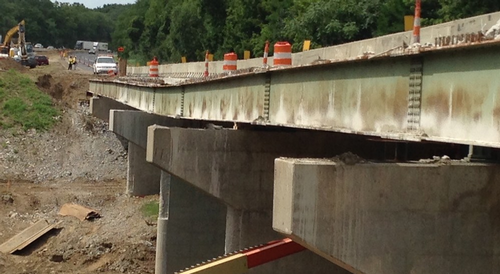 INDOT
A permanent solution to the sinking pier on the Wildcat Creek Bridge on I-65 in Lafayette, IN, is in a test phase, according to INDOT.

INDOT brought in workers from Nicholson Construction Co. (Cuddy, PA) on Aug. 16 to develop and test its solution to bring the bridge back into commission, the Lafayette Journal & Courier reported Wednesday (Aug. 19).

INDOT indicated that the specialized geotechnical construction crew had been brought on site Aug. 16 to begin construction of a test micropile near the pier the next day.

Their project contractor, Walsh Construction Company, would install steel casings, grout and high-strength, small-diameter micropiles through the footers of the existing pier and deep into the soil, INDOT said in a press release.

This involved drilling steel casings through the water-tight soils, injecting grout to fill and densify the sandy soils below, and then installing the micropiles.

Test pile installation was to be completed on Aug. 19, but the grout required three days to cure.

Crews will test how the micropile distributes load to the adjacent soils before finalizing the designs to repair the bridge.

INDOT spokesman Will Wingfield told the Journal & Courier that the findings from the test pier will shape the final design of the bridge repairs.

INDOT also reported that Walsh and Purdue University installed sensors as a safety measure, monitoring any movement on the bridge as a result of traffic.

Purdue engineer Jason Lloyd told area station WISHTV that two types of sensors were put in place: an inclometer to measure tilt and a strain-gauge to measure stress and how much load the bridge is carrying.

“With that data, we can calculate actual displacements in terms of inches or even feet if that’s the case,” Lloyd said of the inclometer.

Of the strain-gauge, he added, “As trucks drive over, you see these stresses change.”

Delivering real-time data, Lloyd told the Journal & Courier that the sensors can help them identify what is normal vibration from truck traffic. “From there we can determine something that may be other than truck traffic, such as settlement,” he said.

According to the station, the sensors are currently being used by INDOT to monitor the southbound bridge, which is carrying traffic as a result of the closure. Lloyd said everything appeared normal to date.

The bridge originally closed Aug. 4 after crews, working on an $82.8 million rehabilitation and widening project on I-65, noticed unusual movement and rocker bearings fall from a bridge pier.

Temporary steel supports were delivered and installed overnight, meant to provide reinforcement until new bearings could be made and installed.

However, by Aug. 7 the bridge was closed once again when structural engineers saw movement in the riverbank pier.

As part of the project, construction crews drove steel piles into nearby soils to widen the existing piers and sheet piling to work below the Wildcat Creek waterline, which contributed to the problem, according to an Aug. 14 bulletin.

INDOT reported that experts had determined that the piles pierced the water-tight soils to a sandy layer with water under pressure. Sand and/or water percolated up from beneath the bridge pier, causing it to tilt. Structural engineers monitoring the riverbank pier noticed the pier settling and tilting, and ordered the bridge closed.

INDOT Commissioner Brandye Hendrickson said, “We are confident the issues are related to construction activities, and the remedy will provide a safe and long-term solution.”

The Indianapolis Star reported the bridge will remain closed for repairs into mid-September.