From metal roofs to naval ships, a novel coating can supposedly keep surfaces at air temperature under the sun and help prevent premature aging.

Benkoski says he chose to work with glass, which is made out of silica, for the coating because it is hard, durable and has the right optical properties. 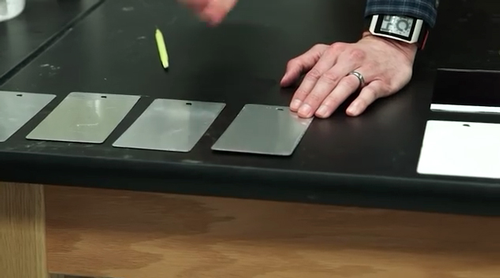 American Chemical Society
Benkoski's silica-based coating, for use on military ships and other metal surfaces, can expand and contract with fluctuating air temperatures, reflect sunlight and resist water.

He told Forbes magazine, his lab was inspired by the durability of paints known as “water glass.”

“The starting materials are the cheapest things you can imagine—sand and potash,” he said.

The long-standing facades in Germany and Switzerland were given as an example of the exterior use of water glass paints—they likely have maintained their splendor over time because the glass reflected sunlight.

Water glass paints required a clean rough surface to cling to, though, which doesn’t make them a good match for metal, Benkoski explained.

In the lab, Benkoski began with silica, one of the most abundant materials in the Earth’s crust, and modified one version of it, potassium silicate, that normally dissolves in water. His tweaks transformed the compound so that when it’s sprayed onto a surface and dries, it becomes water resistant.

Benkoski explained the logic behind his research: “Most paints you use on your car or house are based on polymers, which degrade in the ultraviolet light rays of the sun. So over time you’ll have chalking and yellowing.

“Polymers also tend to give off volatile organic compounds, which can harm the environment. That’s why I wanted to move away from traditional polymer coatings to inorganic glass ones,” he said in a release from the American Chemical Society.

Unlike acrylic, polyurethane or epoxy paints, Benkoski’s paint is almost completely inorganic, which should make it last far longer than its counterparts that contain organic compounds, according to the ACS. His paint is also designed to expand and contract with metal surfaces to prevent cracking.

Mixing pigments with the silicate gives the coating an additional property: the ability to reflect all sunlight and passively radiate heat. Since it doesn’t absorb sunlight, any surface coated with the paint will remain at air temperature, or even slightly cooler. That’s key to protecting structures from the sun.

“When you raise the temperature of any material, any device, it almost always by definition ages much more quickly than it normally would,” Benkoski said.

“It’s not uncommon for aluminum in direct sunlight to heat 70 degrees Fahrenheit above ambient temperature. If you make a paint that can keep an outdoor surface close to air temperature, then you can slow down corrosion and other types of degradation.”

“It’s almost like painting a rock on top of your metal. And this is going to last not tens of years but maybe hundreds of years,” he said in National Geographic.

Applications in the Field

The paint Benkoski’s lab is developing is intended for use on naval ships (some funding for his work was provided by the U.S. Office of Naval Research), but it has other potential commercial applications, including as a cool roof coating.

“You might want to paint something like this on your roof to keep heat out and lower your air conditioning bill in the summer,” he said.

“White paint by itself does a good job,” reflecting about 90 percent of the sun’s energy, he told National Geographic.

But, he explained, a polymer-based coating cannot reject ultraviolet light like a silica-based paint can. “With as little as three years of UV degradation, a polymer paint could absorb twice as much solar energy as it did when freshly painted,” he added.

He suggested the paint could also go on metal playground slides or bleachers. And it would be affordable. The materials needed to make the coating are abundant and inexpensive.

He indicated he also expects to find applications for ceramics such as glass, concrete and rock, as well as fiberglass or previously polymer-painted surfaces.

Not yet on the market, Benkoski says he expects his lab will start field testing the material in about two years.

He told National Geographic it could take five years for the product to reach the commercial market, and he expects the paint’s chances for success will be bolstered by the Navy’s sponsorship of his research.

Benkoski presented his work at the 250th National Meeting & Exposition of the American Chemical Society (ACS) on Sunday (Aug. 16). ACS, the world’s largest scientific society, is holding the meeting in Boston through Thursday (Aug. 20).