Sometimes cleaning off decades of industrial dirt and grime can stir the imagination.

That’s what happened when a Polish power company decided to clean the surface of one of its concrete dams. Instead of using a coating to create a mural, workers used powerwashers to etch a design on the dam’s dirty face. 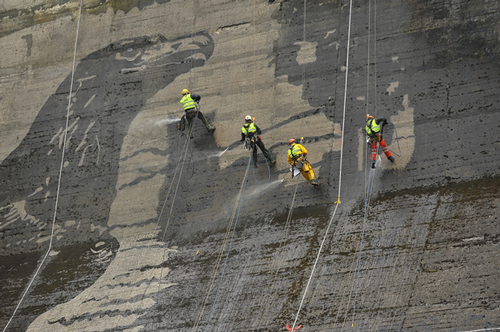 Curtis, who is one of the best-known reverse graffiti artists, made those comments in a 2006 article in The New York Times. But he was requoted—and properly sourced—in an article written Tuesday (Aug. 11) in The Atlantic's CityLab.

The CityLab article referred to Curtis’s work because of the project being undertaken by Polska Grupa Energetyczna (PGE) on the Solina Dam. Working with comic book artist Przemek “Trust” Truscinski, the energy company has used refacing to create a giant eco-mural.

The mural features wild animal and plant life found in the Bieszczady Mountains in southeast Poland.

According to CityLab, workers were suspended from cables and armed with nothing but a high-pressure washer to create the mural, which is almost 300 feet wide by 177 feet tall. They used the washer to “erase” the dirt and grime that had collected on the 269-foot dam since it was first completed in 1969.

The workers also are creating similar art on the sidewalks near the dam. Examples of the art include a wildcat, a fish and trees.

Despite being non-destructive in nature, reverse graffiti can be as controversial as regular graffiti. Not everyone appreciates such art, as City Lab notes, and Curtis has been arrested several times.

Still, as Curtis said: “It’s very temporary. It glows and it twinkles, and it fades away.”