News groups were abuzz earlier this month as they reported on the dismal Q2 2015 performance data released by the “big three” Korean shipyards. But how are shipbuilding programs in other countries faring?

Australia is taking measures to boost its own shipbuilding program by focusing on the domestic production of its frigates and other naval vessels and adjusting timelines on planned projects.

In the Monday (Aug. 10) DefenseNews, Australian Prime Minister Tony Abbott referred to this as a "continuous build" program which would be a means to avoid the “boom and bust” cycles typically experienced by their naval shipbuilders. 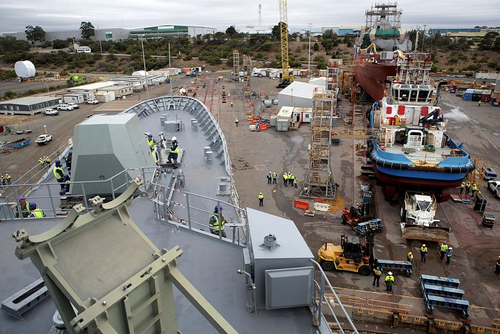 LSIS Lee-Anne Mack, Navy Imagery Unit - West, Commonwealth of Australia
The Australian goverment has committed to supporting a "continuous build" program of naval shipbuilding to avoid the "boom and bust" cycles that are common to the field.

Australia’s government has committed itself to its shipbuilding programs, along with the Future Submarine Program (which oversees delivery of the next generation of submarines for the Royal Australian Navy), by investing, AUS $89 billion (US $65.4 billion) over the next 20 years.

In the near term, an additional AUS $1.2 billion (US $920 million) investment is planned for the Air Warfare Destroyer (AWD) program, which has been reported as being plagued by extreme delays and in need of reform.

“This means that Australia's shipbuilding workforce will build the Navy's future frigates and offshore patrol vessels," Abbott told the news site. "This strategy will transform Australia's naval shipbuilding industry and put it onto a sustainable long-term path, giving the workforce certainty in the future."

According to DefenseNews, the surface combatant projects are expected to save 1,000 shipyard jobs that would have been lost otherwise. They estimate that the program will generate 2,500 jobs over the life of the programs.

Portsmouth Naval Shipyard in Kittery is feeling the positive effects of long-term federal contracts and job growth. The Portland Press Herald reported that, as of December 2014, the Kittery shipyard had plans to hire 700 new employees by the end of their fiscal year, Sept. 30.

Since then, shipyard spokesman Gary Hildreth indicated the number increased to 900. Taking attrition into account, he projected that the workforce would increase from 4,700 staff in 2014 to 5,350 by the end of September.

Bath Iron Works, which describes itself as a full-service shipyard specializing in the design, building and support of complex surface combatants for the Navy, faces leaner times, with concerns that worker positions will be cut.

As Lawton pointed out, BIW operates in a market where they bid on contracts that may or may not come through and are competing with other shipyards—specifically Ingalls Shipbuilding in Pascagoula, MS—on those deals.

With a history of building warships—such as the three stealth destroyers it’s currently building at nearly $4 billion each, according to the Herald—it will be affected as the Navy downsizes its fleet.

With its sites set on a $10 billion Coast Guard contract next year, the company indicated it might have to cut 1,000 of its 5,700 positions if that bid falls through.

Looking in Other Regions

Chinese online retailer Alibaba Group Holding Ltd., considered the largest e-commerce company in the world, has turned to an investment in ships as a business requirement.

According to Splash24/7, Asia Shipping Media, the company’s new car division will require a “fleet” of car carriers. In reality, one or two 5,000-ceu car carriers would be required to transport their expected sales volume of 300,000 cars per year, the site said.

The company appears to be searching for its own shipping solution as existing carriers didn’t meet Alibaba’s price goals.

Alibaba is reported to handle 80% of China's e-commerce, with transactions totaling $248 billion.

In Turkey, shipbuilders are seeking new markets. Seeing their boat and yacht exports dip 13.5 percent in 2015 through July, according to data from the Turkish Exporters’ Assembly as reported by Hurriyet Daily News (Turkey).

Basaran Bayrak, head of the Turkish Ship and Yacht Exporters’ Association, told the news agency that strained relationships in the North African market signals a need to expand their reach.

“We could not do business with our Egyptian counterparts,” he said. “They do not want to give a role to Turkish shipyards in big projects. The same trend is also becoming the case in Algeria, Morocco and Tunisia.”

As in the Korean market’s recent experiences, falling oil prices have also negatively affected the Turkish ship and yacht exports, and their builders are seeking new markets and ways to diversify their offerings.

Bayrak indicated that Europe remains their largest market, and they are also looking toward a place in the Russian and North American markets.