The U.S. Navy is trying out a new painting method to keep marine foul off of attack submarines in an effort to extend the vessels’ service expectancy.

According to the Associated Press, the changes were developed by private and government shipyards after the Navy inquired about ways to make the $2.6 billion subs last longer.

“They’re not very glamorous but they’re huge in terms of payback to the fleet," said Navy Capt. Mike Stevens, a manager for the Virginia-class submarine program at Naval Sea Systems Command.

The underwater vessels are getting more than just an updated paint job. They also are getting water-resistant grease for hatches, special coating to prevent deposit buildup on the metal rods that extend the bow planes and redesigned water-lubricated bearings to improve propeller shaft-support, the news organization said.

All of this is being done to increase the time the submarines will have to go between maintenance services. Right now, that’s six years. The AP reported that the Navy hopes these changes will extend that by two more. 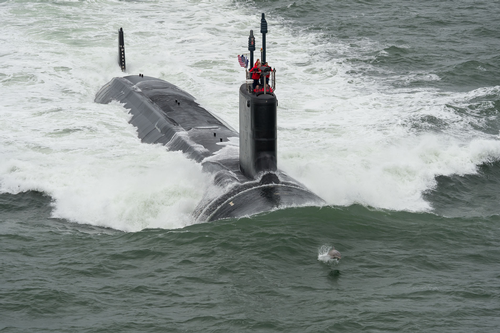 Commander Navy Seals Command/Chris Oxley
The U.S. Navy and General Dynamics Electric Boat are trying a new anti-fouling coating process as part of their effort to extend the life of Virginia-class nuclear submarines.

In addition to decreasing cost, the Navy hopes the changes also will increase the number of combat deployments for each of the submarines.

“We want them to spend as much time at sea as possible,” Stevens said.

The ships are painted in Quonset Point, RI. There, the Navy has invested in facilities that can apply the anti-fouling paint more rigorously during construction.

For complete overhauls, the Navy now uses a powder-coated, high-gloss paint application that endures better under water and does not need as much maintenance.

Workers who build the submarines—at General Dynamic’s Electric Boat in Groton, CT—came back with 800 ideas, the news organization reported.

From those, the Navy chose to incorporate 128 of the ideas, said Ken Blomstedt, Electric Boat’s program manager for Virginia-class submarines.

USS Virginia-class subs went into the water in 2004. Since then, 12 additional subs have been added to its class. They are nuclear-powered and typically are deployed for six months at a time, the news organization reported. Each of them has a life expectancy of about 33 years.

But the Navy also is looking to replace its aging Los Angeles-class attack subs, the AP said. The 53 total attack sub fleet already is available less often than demand, although the vessels have seen less use since the end of the Cold War.