What may be the longest-range weather forecast ever predicted will be used to help building designers better create structures that are able to withstand Mother Nature’s fluctuating changes.

Researchers at the University of Bath and Exeter University will develop 85 years of simulated weather patterns in the UK, Bath said in a recent statement. They will use a time series to predict weather from now until 2100 to help understand changes in weather and how to make buildings more resilient to them.

Trying to Save Lives

The hope, researchers say, is to save lives by making structures adaptable to short-term change in weather fluctuation. The number one cause of weather-related fatalities is brief, extreme change in temperature, said David Coley, a project leader and the director for the Centre for Energy and the Design of Environments.

“These temporary temperature variations account for more weather-related deaths than all other weather events combined, including lighting strikes; rain; flooding; hurricanes; and tornados,” said Coley, who also is a professor of low carbon design at the University of Bath. 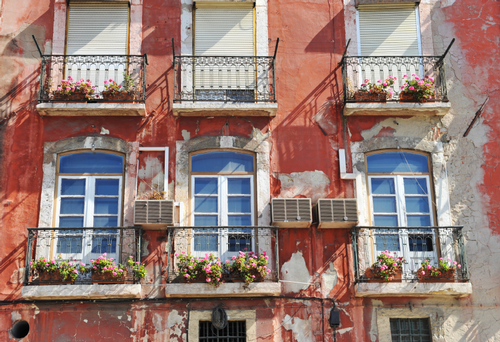 ©iStock.com / brytta
Researchers in Europe are simulating 85 years of weather to help determine what building designs stand up best to changing temperatures.

“It is important that we recognize the role buildings play in responding to and dealing with extreme weather conditions—buildings can keep people alive during extreme weather events, but they can also kill.”

The scientists note that in 2003 alone, more than 70,000 people died in Europe because of a wide-spread heat wave. In that event, the buildings were not designed to withstand the extreme heat and subsequently did not protect people within them well enough.

Cold snaps represent another concern, researchers said. As of now, building experts and researchers do not know how quickly a structure would reach a critical cold temperature if Europe’s energy supply—and subsequently, the heat supply—suddenly went out.

“The time series of example hourly weather we are devising in conjunction with testing these variations on different building designs will help us to better develop building designs that can safely and comfortably house occupants and avoid weather-related preventable deaths in the future,” said Coley.

What happens to the weather itself isn’t the only concern, the university said in its statement. The UK relies on imported gas and recent political tensions with Russia also raise concerns. Global climate change also plays a factor in changing weather patterns and building design, the research team has said.

“It is widely accepted that climate change will have a significant impact on UK building design and energy use in the near and distant future,” a University of Bath spokesman recently told Engineering and Technology Magazine.

“With predicted temperature changes being large enough to make some buildings become uncomfortable or even fail certain regulations, the need for a better understanding of future weather trends in relation to building design is imperative in ensuring buildings become sustainable.”

From the Outside Looking In

Although the project will examine common weather patterns throughout Europe, the weather extremes will help the researchers understand what happens inside a building in the case of hot or cold temperatures; wind; and the sun.

The universities have said they will examine 1,200 different building designs to see how well they stand up to these patterns and also determine what affects they have on a variety of building services, such as heating and air conditioning systems.

Researchers have received a £1m (US$1.54 million) Engineering and Physical Sciences Research Council (EPSRC) grant for the project.