Coating Made to Signal Dehydration

What if you could tell when your workers were dehydrated by the shirts on their backs?

When applied to clothing, the garment changes color responding to the sweat secreted by the wearer, according to project details.

For example, blue would signal the wearer is well hydrated, while yellow and brown would signify dehydration due to the amount of acid in the sweat. The shirt would also exhibit shades of green, meaning the wearer is hydrated enough. 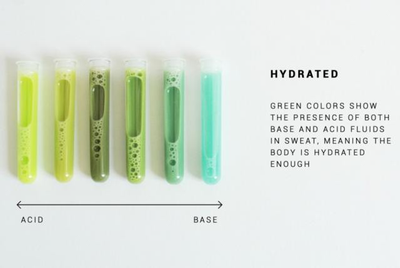 paulienrouts.com/
SOAK is a sport-focused textile coating. "As the wearer sweats, the applied pattern will change of color, communicating whether or not the wearer’s sweat has healthy water/base level," according to project details.

The brainchild of design, researcher Paulien Routs reports on the project website that the development is geared toward athletes and wearable sports gear.

But we think the technology could also be applied in the construction industry, where workers are often exposed to outdoor working conditions and are at risk of dehydration.

Dehydration is classified as mild, moderate or severe based on how much fluid is lost. Severe dehydrating can be life-threatening.

Additional details about the technology were not immediately available Thursday (Aug. 6).