Instead of breathing smog-filled air, a Dutch artist is suggesting people slip smog particles on their fingers or pin them to their shirts.

Daan Roosegaarde is building what he calls the world’s “largest smog vacuum cleaner.” The Smog Free Tower cleans the air in public spaces and then converts the smog particles into wearable jewelry. 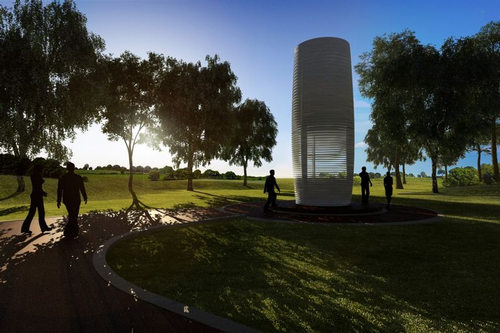 Photos: Studio Roosegaarde
The Smog Free Tower, which artist and creator Daan Roosegaarde calls the "largest electronic vacuum cleaner in the world," cleans the air of smog and turns it into jewelry.

It’s one of several projects from Studio Roosegaarde, based in Rotterdam, The Netherlands. According to the studio's website, Roosegaarde and his team of designers and engineers create interactive designs that explore the relationship among people, technology and space.

The Smog Free Tower is basically a giant ionizer, according to a Friday (July 31) article in Gizmag. Like several of Roosegaarde’s other projects—such as glow-in-the-dark bike lanes and smart highways, that show different markings at different temperatures—the Smog Free Tower is a kind of urban renewal project.

“The technology is actually, sort of, borrowed from indoor air-purifying technology, which is used in hospitals,” Roosegaarde explains in a fundraising video he created about the project. “We are just upscaling it, and building the largest electronic vacuum cleaner in the world.”

Although the project is not designed to rid the world of smog, Roosegaarde said the Smog Free Tower will allow people to get a “sensory experience” of a potential clean-air future.

Roosegaarde said the 7 by 3.5 meter (12 by 11.5-foot) structure draws in dirty air, purifies it, and then releases clean air back into the atmosphere. He describes the process as creating a localized “bubble” that is 75 percent cleaner than the air in the city where the tower is located.

Art from the Air

But the tower does not stop its contributions once it cleans the air. The filtered particles collected from the smog are compressed into cubes, which then are mounted onto rings and cufflinks.

“We look at this (the smog particles), and on one hand we’re disgusted by it, but on the other we became fascinated by it,” Roosegaarde said in his video. “This is not waste, because waste in the future does not exist.”

Roosegaarde said 42 percent of the smog particles are made of carbon—which, under high pressure, becomes diamonds. That, he said, is how he came up with the idea to create jewelry out of it.

Gizmag said the project has been in development for three years. The tower is scheduled to be completed by Sept. 4, when it will open in Rotterdam with a “Smog Free Party.”

The Smog Free Tower is then expected to travel around the world, with stops in Beijing, Mumbai and Paris already scheduled.

Roosegaarde also has asked for donations to help raise money for the project. Those who give €50 (US$55) on the campaign’s Kickstarter page receive an unmounted smog cube once the project is off the ground. Those who make larger donations will receive the jewelry.

As of Wednesday (Aug. 5), the campaign had 448 backers who had pledged $35,920, according to Kickstarter. There were 42 days remaining in the campaign.