Imagine a house so efficient it can produce 60 percent of its own power and cost its owner nearly nothing out of pocket every year.

That’s the goal of solar homes, which are growing in popularity in Europe.

With 1,700 of them already spread around Germany, Switzerland and Austria, researchers at German-based Fraunhofer Institute for Solar Energy Systems ISE recently set out to see just how efficient they are.

In a report released Monday (Aug. 3), the research and development group in Freiburg said it examined nine homes in conjunction with teams from the Solar- und Wärmetechnik Stuttgart, the Technische Universität Ilmenau and the Sonnenhaus-Institut. 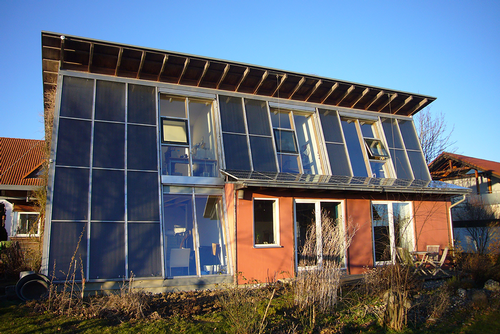 Fraunhofer ISE
Researchers at Fraunhofer ISE studied nine solar houses in Europe to see just how efficient solar energy really is. They determined a 60-percent-solar home is a more cost-efficient compromise to a 100-percent solar home.

Called the Heizsolar project, the object was to give solar housing a thorough scientific study.

Gerhard Stryi-Hipp, group manager at Fraunhofer ISE, said the teams monitored the homes over several heating periods and then analyzed the results.

“This gave us a foundation from which to optimize the houses and lower costs,” said Stryi-Hipp. “We expect this will significantly enhance their importance in the future.”

One of the reasons solar homes will become important is a change in European policy regarding home efficiency, said Fraunhofer ISE. The European Union’s Energy Performance of Buildings Directive, which requires that all buildings constructed be near-zero-energy structures, begins in 2021.

That means in just six years, buildings will have to use minimal amounts of fuel, the research group said. Solar homes fit that demand because they use rooftop solar thermal collectors to heat water. The hot water is then stored for later use. Excellent insulation helps maintain the heat that the homes generate, the report said.

But 100-percent-solar homes are still somewhat rare. Not only are they more expensive, but also they require a lot of space to accommodate their long-term storage units, said Fraunhofer ISE.

Still, even a 60-percent-solar home requires some additional source of fuel, said Stryi-Hipp.

“From November through January, the additional 40 percent must come from a gas or wood-fired boiler,” he said.

During the research, the team also came up with the idea to create a solar simulation model, the report said. This will allow contractors and homeowners to identify areas where solar homes could be modified without cutting into their efficiency. Until now, experts with hands-on experience were needed to be able to address those issues.

The group said it hopes its model will help people answer questions—such as how much the tank size can be reduced—that will make solar homes more popular.

Other changes to the homes also could help them use less additional fuel, he said.

“If you install the tank in the stairwell, for instance, the waste heat isn’t wasted during heating season," said Stryi-Hipp. “And if you also install a window through which waste heat can be released, it won’t bother you in the summer.”

The research group said that while the study helped provide answers to those who are looking at solar-active houses as opposed to passive-energy houses—those that rely mainly on strong insulation and a ventilation system that recovers and redistributes heat—it also determined that further study was needed to research other challenges.

Those challenges include how 60-percent-solar houses stack up against zero-energy homes or energy-plus houses (buildings that are equipped with photovoltaic elements to generate electricity, which is used, in part, to power heat pumps). The research team plans a follow-up study, its report said.

Fraunhofer ISE said that the project as supported by the Forschungszentrum Jülich and received 1.5 million euros (US$1.63 million) in funding from the German Federal Ministries for the Environment, Nature Conservation, Building and Nuclear Safety, and for Economic Affairs and Energy.