LaGuardia to Get $4B Makeover

In light of comments comparing New York's LaGuardia Airport to a "Third World country," the transportation hub is in for a $4 billion remodel.

Late Monday, July 27, Vice President Joe Biden was on hand as Gov. Andrew Cuomo revealed a massive plan to remake LaGuardia Airport from the ground up—rebuilding the terminals to improve the overall impression and atmosphere for passengers and expanding exterior space to ease ground congestion. 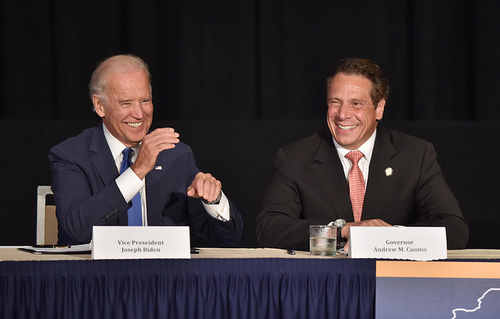 Photos: New York State
During the unveiling of the redevelopment of the airport structures and property, Gov. Cuomo jokingly referenced Vice President Biden's quip that the current state of LaGuardia Airport makes it feel like a Third World country.

“LaGuardia is slow, it’s dated, it is a terrible front door to New York,” Cuomo said in his presentation before the Association for a Better New York.

"We want an airport that is a state-of-the-art facility," Cuomo said. "We want a globally renowned airport for the next century that is worthy of the name New York and what we’re doing."

New York State American Federation of Labor and Congress of Industrial Organizations President Mario Cilento said, "This is a huge construction project that will create good, prevailing wage jobs with benefits for all airport workers and our union brothers and sisters."

A New Vision for New York

“New York had an aggressive, can-do approach to big infrastructure in the past—and today, we’re moving forward with that attitude once again,” Cuomo said in a statement.

The plan calls for demolition and redevelopment of existing structures to make way for a new “grand entryway” 600 feet closer to the Grand Central Parkway, the main highway serving the airport.

This modification will open up space for planes maneuvering to and from gates, opening up 2 miles of new taxiway.

Partners in the project include the Port Authority of New York and New Jersey, LaGuardia Gateway Partners (LGP) and Delta Airlines. LGP is composed of a number of firms, including:

Funding will come from a private-public partnership, with the Port Authority kicking in roughly 50 percent.

The current airport sits on 680 acres along the East River, which is far less than other airports managing similar passenger loads. The airport will remain on its current site.

One half of this $4 billion construction project is slated to break ground in early 2016, creating 8,000 direct jobs and 10,000 indirect jobs.

The other half of the project, the redevelopment of the Delta Airlines terminals, will occur on a parallel schedule to the other work.

In a comment in the New York Post, Patrick Foye, executive director of the Port Authority of New York and New Jersey, said: “Amazingly, nearly as many planes will be able to fly in and out of the airport during construction as there are now. There are going to be times when flights have to be scaled back, but mostly it will continue to operate at its current level.”

Currently, LaGuardia’s four terminals are spread out across the property. In the redesign, Terminal B will come down and one larger “architecturally unified” terminal will be erected.

This “western half” of the new terminal will link to Delta’s Terminals C and D in the eastern half. The work on Delta’s terminals will bring them closer to the Grand Central Parkway and connect them to the new Central Arrivals and Departures Hall in the western half.

In addition to a closer proximity to the Grand Central Parkway, the new terminal will also feature what the panel calls “island-gates”—pedestrian bridges passing above the taxiways by which passengers will reach their gates.

These raised passenger walkways will help to ease congestion on the tarmac, opening up 2 miles’ worth of new taxiway—a 240 percent increase in space for operations.

The plan suggested additional benefits will include shorter gate delays and a decrease in carbon emissions from a reduction in idling time needed for planes.

New transportation options for passengers are slated to be developed as well, including an AirTrain terminal connecting LaGuardia to the New York City subway and Long Island Rail Road at Mets-Willets Point Station, as well as ferry service to the Marine Terminal, Terminal A.

Inside the facility, a tram or monorail will transport passengers and help to integrate the Marine Air Terminal with the rest of the airport.

LaGuardia had felt the effects of Superstorm Sandy in 2012, closing for two days after millions of gallons of water flooded it.

From this experience, the panel has built in recommendations to address severe weather events; for example, elevating the critical infrastructure so the airport remains functional during flooding.

LaGuardia currently provides about $16 billion in economic activity to the region annually, generating about 121,000 total jobs and $5.9 billion in annual wages.

The panel asked the Port Authority to make use of the region’s communities in terms of employment and achieve 30 percent participation of Minority– and Women–Owned Enterprises, per Cuomo’s Oct. 2014 goal for state contracting.

LaGuardia is not alone in this rehabilitation plan. Three others nearby, including JFK International Airport, Stewart Airport, and Republic Airport, will benefit from the state’s redevelopment plans.

A new high-end hotel is to be constructed at JFK, one of very few international airports with no attached hotel.

The TWA Flight Center, designed by renowned architect Eero Saarinen, will be revamped into the LEED-certified TWA Flight Center Hotel, boasting 500-plus rooms, 40,000 square feet of event space, and a 10,000-foot observation deck.

Construction is expected to begin next year on the $265 million redesign, with an open date in 2018.

Tyler Morse, CEO of MCR Development, the New York-based developer responsible for this project said, “The TWA Flight Center Hotel will be an economic engine and a world-class airport hotel, creating approximately 3,700 construction and permanent jobs.”

As for Republic and Stewart Airports, RFIs have been issued by Empire State Development with a focus on enhancing regional economic activity at both airports.