Researchers at Queensland University of Technology have discovered that a certain reflective, white coating can decrease a building’s inside temperature when it’s applied to the roof.

The paint led to a 2-degree Celsius (3.6-degree Fahrenheit) drop in temperature to the inside areas, according to the study.

The two-year project was led by professors John Bell, head of the School of Chemistry, Physics and Mechanical Engineering; and Wendy Miller, a senior research fellow at the school in Brisbane, Australia.

They looked at how the coating affected 16 buildings on 10 sites without air conditioning, and then took measurements both before and after applying the special white coating. The researchers then checked the temperature on the roof surface, on the roof cavity and on the inside of the structures.

Not only did the coating lower the temperature, it lowered electric bills, too. 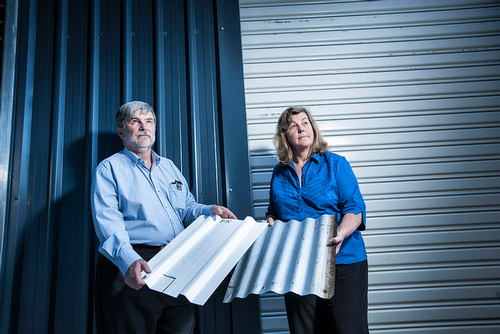 “We saw average energy savings of between 5 (percent) and 30 percent across the range of buildings, with most buildings showing savings above 15 percent," said Bell of the findings.

“For an air-conditioned block of two classrooms in Springfield to the west of Brisbane, for example, we reduced electricity use by 1,144 kilowatt hours per year, which is roughly 1 ton of CO2 per annum reduction for these two classrooms alone.

“Both electricity consumption and peak demand were significantly reduced, resulting in lower electricity bills for the school,” said Bell.

The paint was developed by a company called ShieldCoat, which is based in Brisbane. The researchers painted it on a sample of houses, schools, offices and retail spaces.

A Mixture of Science and Art

Miller said it is a combination of the chemistry and color that makes the product effective.

“The trials indicate the economic benefits of cool roof coatings would be greatest for single-story buildings; buildings with aged, dark or medium colored roofs; buildings with no or low levels of roof insulation; and buildings with high air conditioning use,” she said.

Miller went on to say that the study revealed that the coating prevented heat from entering a building. In some cases, that led to a 30 percent reduction in air conditioning use.

The project was initiated under the Guided Innovation Alliance, which is a collaboration between the university; Ergon Energy, an electricity distributor in Queensland; and SmartGrid Partners, a Queensland-based infrastructure project management company.

Editor's Note: This article was edited at 8:45 a.m. EST to correct the temperature conversion.