The divestment of a Paper Chemicals business unit and favorable currency rates have delivered positive results for coatings giant AkzoNobel for the second quarter. 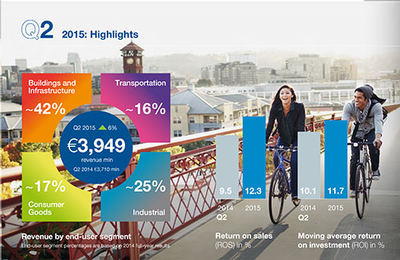 “We continue to deliver on our aim to improve the performance of our company,” said CEO Ton Büchner. “The second quarter continued to show the positive impact of our focus on profitability and leadership in sustainability.”

The company’s Decorative Paints segment recorded a 6 percent increase in revenue and a 25 percent gain in operating income.

Volumes grew in Asia, but were down for Europe and Latin America.

AkzoNobel reported an 8 percent increase in revenue in its Performance Coatings segment. Operating income in the segment increased 24 percent.

Favorable currency rates and higher demand for premium products helped deliver those results, according to the company.

Volumes dipped in the segment due to lower capital and maintenance spending in the global oil and gas industry. Russia, Brazil and China remained challenging markets during the quarter, the company said.

Volumes were flat in the segment.

“The divestment of Paper Chemicals was completed in line with the strategy of pruning the portfolio,” according to AkzoNobel.