COPENHAGEN, DENMARK--Sometimes one man’s pile of scrap wood is another man’s “Happy Mountain.”

That’s the case for Danish artist Thomas Dambo. He has actually made a mountain of wooden boxes out of a trash pile, along with two sculptures he calls a “Happy Wall”—one in his hometown of Copenhagen and another in Las Vegas. 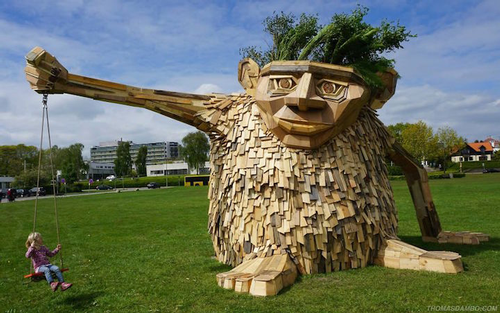 Then there are several sculptures he has created that are part of his “Happy City Birds” collection and an interior design concept he calls “Remake Utopia.”

And even though the 35-year-old designer occasionally lists happiness on his website as one of the materials he used to make such things, Dambo’s medium is mostly recycled trash.

Making the Most of It

“Many designers and artists have a process where they start with an idea,” said Dambo during a recent email interview. “I start with the material, and try to find ideas that fit perfect for that material.”

Dambo and his two associates search their neighborhood looking whatever they can find to create their next piece. They will use anything from small pieces of wood that someone else might throw away to construction materials that others bring to them, he said.

“I only need…long pieces to support the sculpture inside,” said Dambo. “Everything else can be made of small pieces. I can use leftover (materials) from construction sites, old pallets, broken plywood sheets. The more different it is the better.”

In addition to his design work—which includes the sculptures and other exterior and interior designs, as well as furniture and stuff that’s more random—Dambo hosts workshops to teach other people how to create their own art from recycled materials.

The workshops, according to his website, can be geared toward children at a school or even working adults in a corporate environment. They range from showing people how to build their own birdhouses to teaching them how to create their own sculptures.

But Dambo’s main purpose, he said, is to get people to look at trash and recycled materials in a more constructive way.

“I only recycle a tiny little amount of the trash in Copenhagen, and Copenhagen is just a small city in a big world,” said Dambo.

“What I mean is there is room for many…other people to have the same job as me, because there is so much trash in the world.”