ROTTERDAM, THE NETHERLANDS--A city known for its openness to innovation could become the trial center for a plastic road that someday may replace asphalt.

The Dutch community has indicated it is interested in trying PlasticRoad, a material made entirely of recycled plastic. According to The Guardian, construction company VolkerWessel has said that it believes it could turn its concept into a reality in three years.

“Plastic offers all kinds of advantages compared to current road construction, both in laying the roads and maintenance,” said Rolf Mars, the director of KWS Infra, which is VolkerWessels’ roads subdivision. 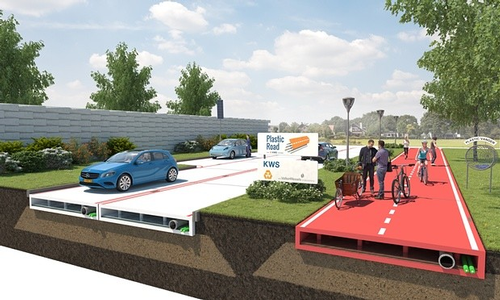 VolkerWessel
The PlasticRoad could change the way roads are built and maintained. Made entirely of recycled plastic, the roads are lighter, last longer and are more durable than those made from asphalt.

A road made from plastic could have several advantages over traditional asphalt surfaces, according to VolkerWessels.

For example, PlasticRoad could be prefabricated and laid down in a matter of weeks instead of months. The roads would be lighter, nearly maintenance-free, and last three times longer than asphalt, VolkerWessel said.

PlasticRoad also could withstand greater temperature changes: from -40 degrees Celsius (-40 Fahrenheit) to 80 degrees Celsius (176 Fahrenheit). And because the space below the plastic surface could be made hollow, other infrastructure—such as cables and pipes—could be run beneath it more easily, the company said.

There’s an environmental advantage in favor of plastic over asphalt, too. Not only will the PlasticRoad project be made entirely of green materials, it also will cut down on carbon-dioxide emissions, backers say. Asphalt alone is responsible for 1.6 million tons of CO2 each year. That is 2 percent of all road emissions, according to The Guardian.

The road is in the conceptual stage, and testing remains to determine if PlasticRoad will be safe in wet and slippery conditions. Still, the concept has other interesting possibilities. For example, roads could be made to be heated or be ultra-quiet, he said.

“It’s still an idea on paper at the moment,” said Mars. “We’re looking for partners who want to collaborate on a pilot—as well as manufacturers in the plastics industry, we’re thinking of the recycling sector, universities and other knowledge institutions.”

A Rotterdam city engineer told The Guardian that the city was an ideal place to try out PlasticRoad.

“We’re very positive towards the developments around PlasticRoad,” said Jaap Peters, who is from Rotterdam City Council’s engineering bureau.

“Rotterdam is a city that is open to experiments and innovative adaptations in practice. We have a ‘street lab’ available where innovations like this can be tested.”