Rust Buddy Solidifier is a water-based, bio-degradable component that is applied directly to active rust on sheet metal, garden equipment and other surfaces.

The manufacturer calls the product a time-saving solution for treating corrosion because it does not require scraping, cleaning or grinding before use. 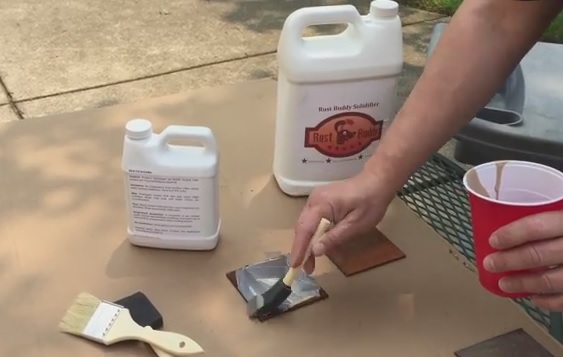 Rust Buddy Solidifier is designed to act as a barrier to prevent additional moisture from getting to the base carbon steel, causing additional rust. The product "works by incorporating itself completely into the rust and locking itself, and the rust, in place," according to the manufacturer.

The company likens the effect to pouring glue into a sponge. "The Rust Buddy Solidifier will deeply penetrate into the rust, lock it in place, prevent moisture from entering into the material any further (thus stopping the rust), and provide a surface suitable for painting," the company says.

The product can be brushed, sprayed or rolled onto any “non-critical” surface. Rust Buddy Solidifier can be used on garden equipment, trailers, bumpers, pipes, sheet metal and other surfaces, the company says.

Rust Buddy Solidifier can be used as a stand-alone to stop corrosion from getting worse, or it can be over-coated using most standard paint systems.

The company offers a money-back guarantee on a company’s first order up to $100. It is available online for $68 a quart or $225 per gallon.