Research ‘Sees’ Rust on the Surface

NEW YORK--Corrosion researchers know that what they see on the surface really does count.

So, a team at Lawrence Berkeley National Lab has devised a way to help scientists who study that multibillion-dollar problem—and other chemical reactions on a structure’s surface—see those surfaces more clearly.

“We are…quite excited by the possibilities of applying (the findings) to corrosion problems,” Laurence Marks, a professor of materials science and engineering at Northwestern University, said in a research announcement. 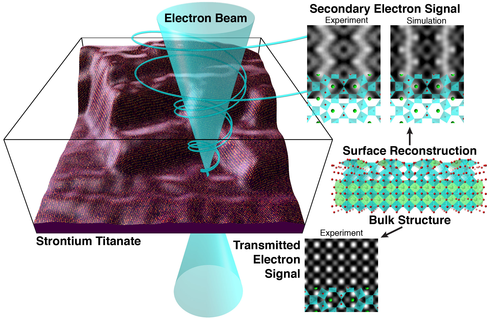 “The cost to industry and the military of corrosion is enormous, and we need to understand everything that is taking place to produce materials which will last longer,” he said.

That means the development of materials and coatings that greatly improve protection against rust on ships, bridges and airplanes could come relatively soon, according to Marks and other researchers on the project.

Their findings also could lead to the development of “greener” fuel sources, because energy-dense fuels originate from surface reactions of sunlight and carbon dioxide.

The research team found a way to read the information that is generated by a high-resolution scanning electron microscope, or HRSEM, so it can be used to “see” surfaces, even those that are rough or uneven.

Scanning electron microscope (SEM) imaging has been around for a while, but using it to analyze a surface’s atomic structure was not possible until the team figured out how to make sense of the results from the more powerful HRSEM.

Better yet, the new technology allows scientists to see below the surface as well.

“We’ve developed a reasonably direct method for determining the atomic structure of a surface that also addresses the very challenging problem of buried interfaces,” said Jim Ciston, a staff scientist with the National Center for Electron Microscopy at the Molecular Foundry.

What's the big deal about being able to hone in atomically on a surface, which accounts for only a fraction of any material? Because, when it comes to the corrosion process, that's where the action is.

“Although surface atoms represent a minuscule fraction of the total number of atoms in a material, these atoms drive a large portion of the material’s chemical interactions with its environment,” said Ciston.

Researchers devised their technique by looking at the secondary electrons produced during traditional SEM. Those electrons are the result of highly energized beams of electrons striking a material and causing the atoms in that material to emit energy as electrons rather than as photons.

Researchers checked their calculations using the surface of strontium titanate, which is well-known to those who study atomic structures.

“Conventional transmission electron microscopy images are well-understood, and were needed to confirm that we actually had the correct structure and that the new HRSEM theory was on the right track,” said Ciston.

“Taken collectively, the analysis enabled us to unambiguously reference surface information to information from the bulk crystal,” he said.

In fact, Ciston said: “We started this work by investigating a well-studied material, but the new technique is so powerful that we had to revise much of was already thought to be well-known.”

Researchers said the next step would be to see how well the technique can be used to analyze nanoparticles.

The Department of Energy provided most of the funding for the study.