CAMBRIDGE, UK--Listening carefully to the silent flight of owls, researchers have developed a coating that may help quiet the roar of wind turbines and other fan blades.

The prototype material, initially being developed for wind turbine blades, "could significantly reduce the amount of noise they make," according to a research announcement from Cambridge University, where Professor Nigel Peake is leading the project.

The coating mimics the intricate structure of an owl's wing, which turns out to be the predator's secret weapon in besting its prey.

“Many owls – primarily large owls like barn owls or great grey owls – can hunt by stealth, swooping down and capturing their prey undetected,” said Professor Nigel Peake of Cambridge’s Department of Applied Mathematics and Theoretical Physics, who led the research. “While we’ve known this for centuries, what hasn’t been known is how or why owls are able to fly in silence.” - See more at: http://www.cam.ac.uk/research/news/silent-flights-how-owls-could-help-make-wind-turbines-and-planes-quieter#sthash.0k4IqEky.dpuf 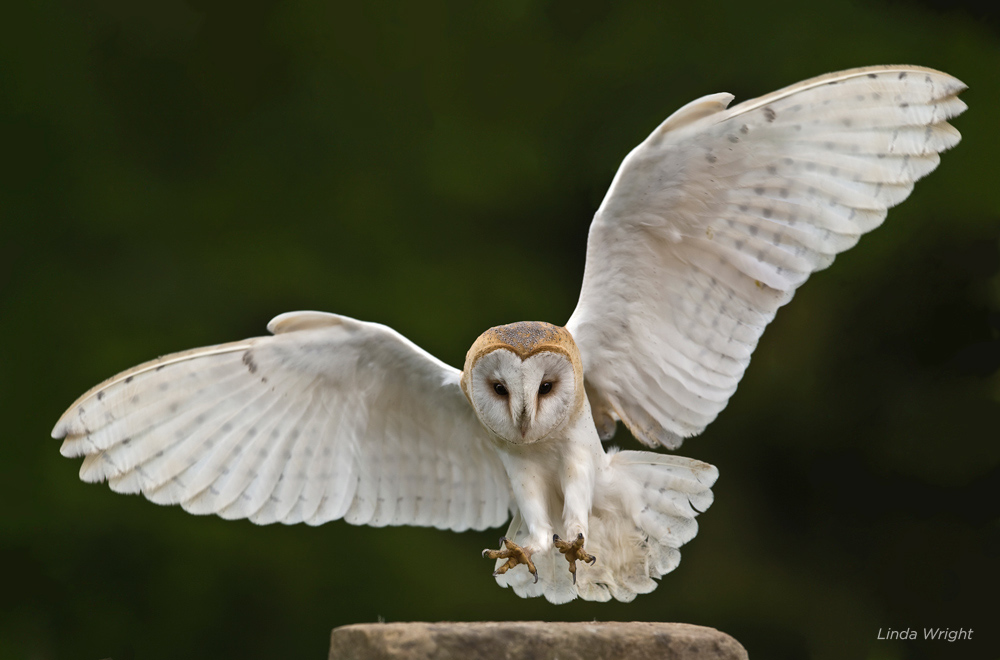 Raptor Research Foundation / Linda Wright
How do big barn owls swoop down on tiny mice prey without being heard? It's all in the wing structure, say researchers, who are using the anatomy lesson in coatings development.

“Many owls—primarily large owls like barn owls or great grey owls—can hunt by stealth, swooping down and capturing their prey undetected,” said Peake, of Cambridge’s Department of Applied Mathematics and Theoretical Physics.

“While we’ve known this for centuries, what hasn’t been known is how or why owls are able to fly in silence.”

Studies using high-resolution microscopy revealed to Peake and his colleagues at Virginia Tech, Lehigh and Florida Atlantic Universities that the owl's flight feathers have a downy covering that creates a "fluffy canopy."

The leading edge of the wing features a flexible comb of evenly spaced bristles, while the trailing edge has a porous and elastic fringe.

Taken together, the unique architectural marvel of the wing dampens the sound of flight, said Peake.

“Much of the noise caused by a wing—whether it’s attached to a bird, a plane or a fan—originates at the trailing edge where the air passing over the wing surface is turbulent," he said.

"The structure of an owl’s wing serves to reduce noise by smoothing the passage of air as it passes over the wing, scattering the sound so their prey can’t hear them coming.”

The researchers tried to replicate the wing structure with a covering that would scatter the sound. The early attempts included covering a blade with a material "similar to that used for wedding veils," Cambridge reported.

The material reduced the surface noise by 30dB, but was deemed unsuitable for applying to a wind turbine or airplane—another application the team foresees.

Eventually, the team developed a prototype made of 3D-printed plastic and tested it on a full-sized segment of a wind turbine blade.

"In wind tunnel tests, the treatment reduced the noise generated by a wind turbine blade by 10dB, without any appreciable impact on aerodynamics," the university said.

The coating still needs to be optimized, then tested on a functioning wind turbine, the university reports.

Significantly reducing the noise generated by a wind turbine could allow it to be spun faster at the same noise level, which could yield "several additional megawatts worth" of electricity, the team said.

Looking ahead, the researchers are eyeing applications for a range of wing and blade types, from jets to computers.

The research was funded by the U.S. National Science Foundation and the U.S. Office of Naval Research.