CLEVELAND--Strong residential and nonresidential building construction activity will bring back the U.S. roofing market in the coming years, experts forecast.

Demand for roofing is projected to increase 3.9 percent per year to 252 million squares in 2019, a value of about $21.4 billion, The Freedonia Group Inc. reports in “Roofing.”  (One square is equal to 100 square feet). 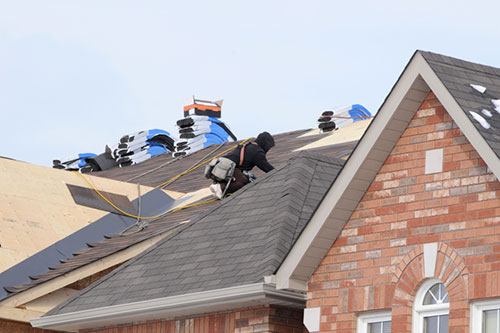 ©iStock.com / LesPalenik
U.S. residential building is expected to surge, leading to a rebound for the roofing market.

The demand for steep-slope roofing is forecast to outpace that for low-slope products due to an anticipated residential building surge, the Cleveland-based market research firm reports.

The new building construction market for roofing is anticipated to post faster gains than the reroofing market through 2019, the firm says.

Reroofing accounted for the larger share of U.S. roofing demand, totaling 81 percent in 2014.

“This is actually a decline from 2009, when new construction activity was at a depressed level and the scope of damage caused by Hurricane Ike and other storms in 2008 boosted demand for replacement roofing in the following year,” said Matt Zielenski, an analyst with Freedonia.

Through 2019, reroofing activity is expected to climb, as home and building owners tackle long-delayed renovations and improvements, the report says.

Asphalt shingles account for the largest share of roofing demand, due primarily to their dominance in steep-slope roofing applications.

Demand for asphalt shingles is forecast to rise at an above-average pace through 2019 (4.7 percent per year), spurred by the rebound in housing starts.

Advances will also be supported by strong consumer interest in laminated asphalt shingles, which many homeowners feel improve the appearance and value of a residence, the firm reports.

At 6 percent growth per year, roofing tiles are expected to see the most rapid growth of all roofing products, driven by strong gains in housing starts in the South and West, where tiles are most often installed.

Demand for roofing tiles will also be fueled by their favorable aesthetics and ability to be used as cool roofs.

Plastic and metal roofing will also see above-average demand gains, the firm reports. Plastic roofing will see increasing use in low-slope applications because of its ease of installation and favorable performance properties, while metal roofing demand will be supported by its durability and ability to support solar panels used to generate electricity, according to Freedonia.