NOTTINGHAMSHIRE--Six UK roof coating contractors will spend 18 months to six and a half years in jail for scamming elderly victims across England in a case called “unprecedented and sickening.” 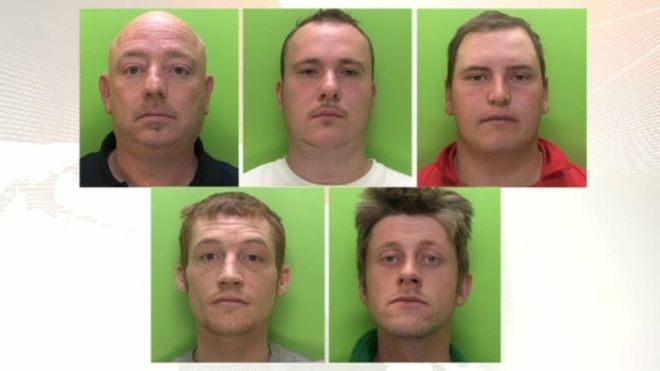 BBC
The contractors were jailed after scamming nearly 100 people of out of hundreds of thousands of pounds. From left: Tyrone Beard, Marcus Reading, Simon Davies, Christopher Russell, and Michael Sumner. Mohammed Ditta is not pictured.

A week into their trial on fraud charges, they pleaded guilty and were sentenced in Nottingham Crown Court on June 12, according to the BBC.

Case documents were not immediately available for review Thursday (June 18). Authorities said there were likely more victims who have not come forward.

Tyrone Beard, 46, and Marcus Reading, 27, of Tuxford, reportedly served as the leaders of the rogue group of contractors and were sentenced to six-and-a-half years and four-and-a-half years in jail, respectively.

Mohammed Ditta, 42, of Bradford, who acted as a salesman, was sentenced to three years.

Simon Davies, 24, and Michael Sumner, 28, both of Tuxford, and Christopher Russell, 28, of Kirkby-in-Ashfield, were sentenced to 18 months in jail.

“The victims were all vulnerable people who handed over considerable sums of money from their hard-earned savings for at best shoddy and at worst non-existent work,” according to councilor Glynn Gilfoyle of Notthinghamshire County Council’s community safety committee.

Gilfolyle told media outlets the scale of the fraud was “unprecedented and sickening.”

The victims included 76-year-old William McBroom, of Beverley, East Yorkshire, who told the BBC that he paid the men more than £2,000 ($3,176 USD) for “moss to be removed from his roof and red insulation to be painted over it.”

However, the paint washed off in the rain and his roof leaked, the report said.

McBroom told the news outlet he was angry, adding "if someone like myself who has all his wits about him can be conned like this, there are many, many vulnerable people wide open."

Another victim told the Mirror that the men were to apply a protective coating to her roof. She had been promised by a “smartly dressed salesman” that her garden would be covered during the process.

However, during the project the men left the homeowner with a “horrible black slurry” on her plants, as well as paint splatters on her driveway and fencing.