Roofer Charged with Lying to OSHA

PHILADELPHIA--In a rare case, the owner of a small Pennsylvania roofing company is facing 25 years in prison for allegedly lying to federal safety authorities regarding the June 2013 falling death of a worker.

Further, prosecutors say the employer directed his employees to also lie to the investigators. 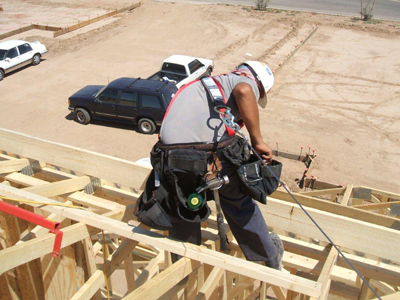 OSHA
James J. McCullagh, 60, was charged in the June 2013 falling death of an employee. Mark T. Smith was killed after he fell 45 feet from a roof, while performing repairs on the Old Zion Lutheran Church in Philadelphia.

He is accused of four counts of making false statements, one count of obstruction of justice and one count of willfully violating an OSHA fall protection regulation causing death to an employee, according to the indictment.

McCullagh faces a maximum sentence of 25 years in prison and $1.5 million in fines, according to Memeger.

The case stems to June 21, 2013, when one of McCullagh’s employees was killed in a 45-foot-fall from a roof bracket scaffold at a repair job at a church in Philadelphia.

The victim was identified as Mark T. Smith, 52, and the church as the Old Zion Lutheran Church, according to philly.com.

Investigators said Smith was working on the roof without fall protection equipment when he fell.

The fall occurred because the roof bracket scaffold Smith was standing on collapsed, according to OSHA. Two employees had been working on the scaffold, designed to hold one worker, according to the OSHA citation documents issued in January 2014.

"This tragic accident could have been prevented had the company provided the proper fall protection for employees," Jean Kulp, the former acting director of OSHA's Philadelphia area office, said at the time of the citations.

During the OSHA investigation, on four separate occasions, prosecutors say McCullagh told OSHA compliance officials that his employees had been wearing safety harnesses tied off to an anchor point when he saw them earlier in the day, prior to the fall.

Prosecutors say that McCullagh, however, knew that he had not provided the workers with safety harnesses or any other form of fall protection.

Further, prosecutors allege that the owner directed his other employees to lie to investigators about using fall protections systems on the day of the fall.

The indictment also states McCullagh willfully violated OSHA’s regulation with respect to roof bracket scaffolds more than 10 feet above a lower level, which requires that each employee be protected from falling by the use of personal fall arrest system or guardrail systems.

That violation “caused the death of” Smith, according to the indictment.

McCullagh’s attorney, Michael McDermott, has declined to comment on the case.

McCullagh Roofing was cited by OSHA in January 2014 for 10 safety violations, including three willful, stemming from the incident.

The company is currently contesting the $71,600 in proposed fines issued in the case.

The company has no other record of past violations with OSHA, according to a review of the agency’s database.

It is rare for an employer to be criminally charged in connection with a workplace death.

Only two criminal prosecutions related to worker deaths occurred in 2014, the National Council for Occupational Safety and Health recently reported.