PITTSBURGH--Being extinct is no excuse for not looking one's best.

Thus, Diplodocus carnegii—"Dippy the Dinosaur," to his friends at Pittsburgh's Carnegie Museum of Natural History—has just completed the mother of all makeovers.

In a behemoth effort befitting his size, the fiberglass replica of the 154 million-year-old beast has just been transformed (in his own words) "from ragged statue to sparkling icon." 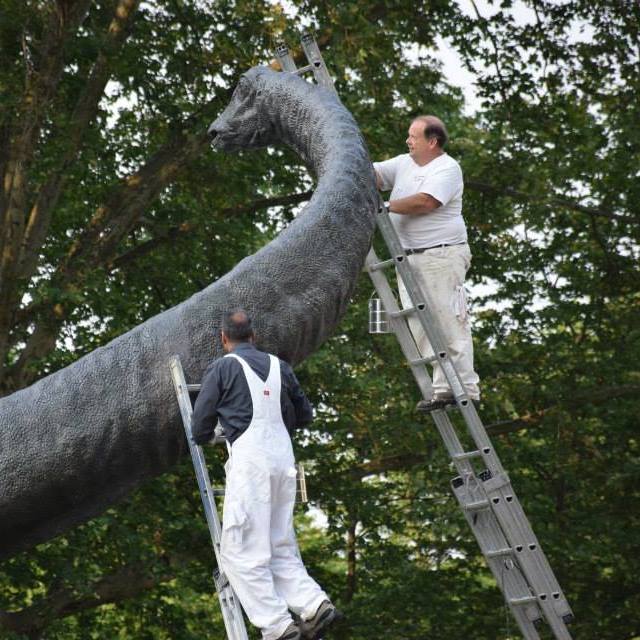 Photos: Facebook / Used with permission
Dinosaurs need paint, too. Painters worked last week to clean and recoat the statue outside the Carnegie Museum of Natural History. Some areas were rescaled by hand. The coatings took a week to set.

Dippy kept fans abreast of the project via his Facebook Page, where all details and more photos are available.

While perhaps less fatal than, say, meteors, Pittsburgh's climate has been none too kind to the sauropod.

“Sixteen years of Pittsburgh weather had taken its toll: Dippy was not only affected by freeze-thaw, but he had a ‘sunburn’—UV light and heat had begun to damage the coating,” the museum said in an announcement on the restoration.

His skin looked like it was shedding, said Gretchen Anderson, the conservator at the museum. Entire chunks of his fiberglass coat had broken off, and new scales had to be created by hand.

Dippy has been a Pittsburgh icon since he first roamed the outside of the Carnegie Museum of Natural History in 1999—the 100-year anniversary of the Diplodocus carnegii fossil discovery by a team of Carnegie scientists.

An avid sports fan, the dinosaur sports scarfs from his Pittsburgh teams throughout the winter.

And considering his age, the long-necked one keeps remarkably current, opining on matters both artistic and scientific.

You can catch his review of Jurassic World on his Facebook page.

Editor’s Note: The story was updated at 9:30 a.m. June 16 to reflect a last minute change to the coating system used on the project.