SYDNEY--Australian scientists have reportedly developed a material capable of keeping a roof cooler than the air that surrounds it, even in intense summer conditions.

The new material is billed as a “first in super-cool roof technology,” according to the team from the University of Technology Sydney (UTS). 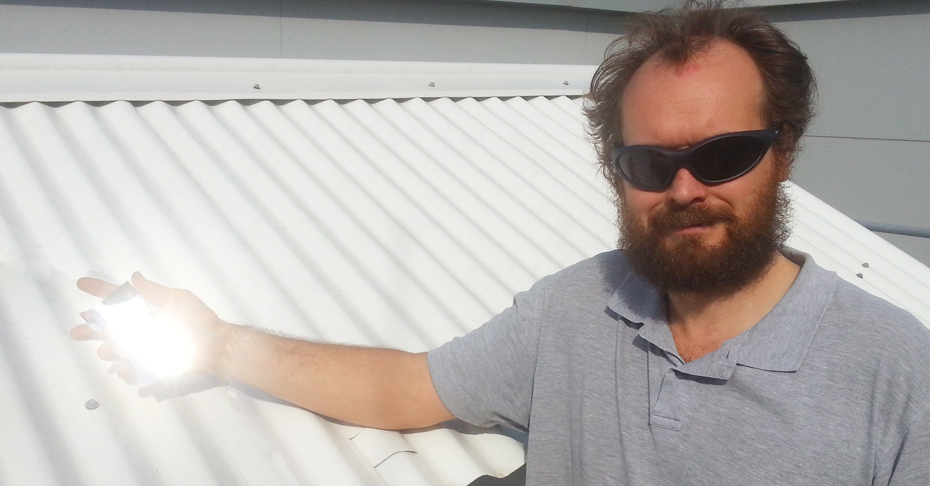 Geoff Smith / Angus Gentle via UTS
Dr. Angus Gentle (pictured) and Emeritus Professor Geoff Smith of the University of Technology in Sydney have developed a roofing material that could reduce the heat island effect in urban areas.

The development has a range of benefits, including reducing the heat island effect in urban areas and peak power demand from air-conditioning, the team reports.

The scientists published their work in the journal Advanced Science.

The team used a mixture of commercially available polyesters and a silver layer to build what it calls a “coated polymer stack.”

The layered structure was designed to reflect strongly across the visible and some non-visible solar wavelengths.

“Roofs heat up by absorbing sunlight, so darker roofs can get very hot,” explained co-author Geoff Smith, an emeritus professor at the University of Technology.

“Even white roofs still absorb enough sunlight to warm up by 9 degrees to 12 degrees Celsius.”

During testing, the polymer stack, however, produced a surface that stayed “11 degrees (Celsius) or more colder than an existing state-of-the-art white roof nearby,” said Smith, who worked with Dr. Angus Gentle on the research.

Applied like a coat of paint, the material mimics what happens on a roof after the sun goes down, Smith told takepart.com.

Once the sun sets, roofs made from heat-absorbing substances not only release heat back into the atmosphere, but also become cooler than the ambient temperature.

“Our surface achieves this in the daytime,” he said, “by reflecting almost all of the incident sunlight, thus allowing the surface to remain cooler than the atmosphere.”

Smith said cooling a roof below ambient air temperature had up until now been “an elusive target.”

Testing took place on the roof of a UTS science building with a clear view of the sky and no shadowing.

Data was collected for an unprotected new surface, and one aged over several days in a polluted outdoor summer environment for assessment of the impact of the build-up of dust and grime, according to the team.

Smith said the surface maintained its high performance under all conditions.

“Extensive dew formation is inevitable for a super cool roof and dew drops precipitate dirt,” he added. “This roof site being 25 meters above a busy city transit road was a stern test.”

The results revealed that “excellent thermal performance” can be achieved and maintained, he said.

Moving forward, the team says it will access the cost of the material. The plastics the team selected for the prototype material are currently used in niche markets, such as small displays and mirrors for solar thermal energy, according to Smith.

Another key challenge the team faces is reducing the glare that results from the material’s highly reflective qualities, takepart.com reports.

The reflection could be a distraction to drivers and others in a densely built environment.

The study has been supported by an Australian Research Council Discovery Project grant.