WASHINGTON--In a show of bipartisanship rarely seen on Capitol Hill, the U.S. House of Representatives is weighing legislation that would provide longterm support for federal transportation funding.

The Bridge to Sustainable Infrastructure Act (H.R. 1846), sponsored by Rep. James B. Renacci (R-OH), would increase the federal gas tax to keep up with inflation.

The bill “…would require Congress to make the highway Trust Fund financially sound for at least 10 years,” according to a press release from Rep. Reid Ribble (R-WI), one of several dozen co-sponsors from both sides of the aisle. 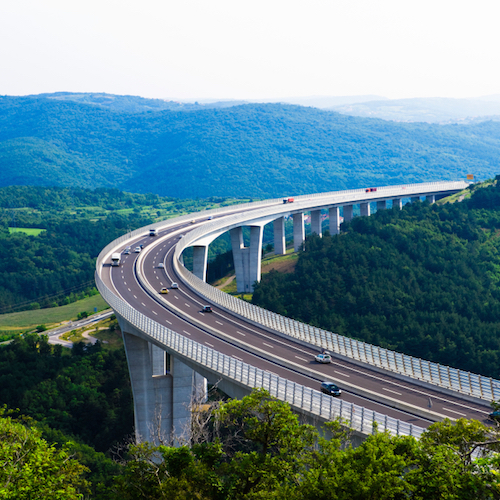 ©iStock.com / gaspr13
The bipartisan Bridge to Sustainable Infrastructure Act would increase the gas tax to support the perennially strapped Highway Trust Fund. Some money would cover the fund's 2015 shortfall.

The measure would also temporarily advance funds to the chronically strapped Highway Trust Fund to cover the expected 2015 shortfall. The Trust Fund is expected to run dry this summer, during the height of construction season.

The bill, co-sponsored by 23 Democrats and eight Republicans, would amend the federal tax code to require the adjustment for inflation in calendar years after 2015. It would raise the rates of excise taxes on petroleum, petroleum products, diesel fuel, alcohol-based fuel and fuels used in certain buses.

The bill would authorize the Secretary of the Treasury to increase taxes as necessary to cover a projected three-year shortfall if Congress has not fully funded the Trust Fund by Jan. 1, 2017.

Finally, the bill would establish a Bipartisan Task Force for Sustainable Highway Funding to analyze and address the highway fund’s chronic imbalance. That bicameral body, to be seated by Sept. 1, "would be charged with determining a path forward for sustainable funding, and would be advised to consider all options," Renacci said.

About 80 percent of highway funding comes from the federally administered Highway Trust Fund, which was established in 1932.

The fund currently allocates about $50 billion annually to the states for upkeep of the system, Renacci notes.

"This annual allotment has two major problems," he said in a statement. "We are spending about $16 billion more annually than the trust fund is bringing in, and we are not spending enough to keep our infrastructure from crumbling."

The gas tax that supports the Trust Fund has remained at 18.4 cents per gallon since 1993, which brings in about $34 billion, according to Business Insider.

According to The Hill, the gas tax would be at 30 cents per gallon if adjusted for inflation from the 1993 levels.

The new bill would generate $27.5 billion, or about two years worth of transportation projects, to bridge that gap temporarily while lawmakers find a way to fix it in the long run.

The bill, introduced April 16, is now before the Subcommittee on Highways and Transit. And despite its bipartisan launch, the measure is likely facing a long road.

In a commentary published June 3 on CNBC’s website, Ribble said the cost-cutting and revenue-increasing measures that will be needed won't be easy.

“This legislation isn’t glamorous, and won’t be popular with my colleagues in Congress, but I didn’t come to Washington to make friends—I came to help solve our nation’s problems,” said Ribble.

Transportation advocates across the U.S. have expressed enthusiasm for the bill.

“Indexing the user fee to inflation is an overdue action that will be easy to implement and administer,” said AAA president Rob Darbelnet in a letter supporting the legislation.

“This will generate the revenue required to maintain the immediate solvency of the Highway Trust Fund, while providing Congress with the time to identify a true long-term solution by September 2016.”

The bill has also drawn support from the U.S. Chamber of Commerce, the American Trucking Association, the AFL-CIO and others.

As the longterm funding picture emerges, debate over the short term continues.

On Tuesday (June 9), the House passed a $55.3 billion spending measure, 216-210, for Fiscal year 2016. The bill would provide funding for the Federal Aviation Administration, the Federal Railroad Administration in addition to the Highway Trust Fund.

But the measure cuts Amtrak funding by $242 million and cuts funding for Washington's Metro light-rail system.

And while the Senate has yet to act, President Obama has already vowed to veto the plan.

Although the appropriation is $1.5 billion more than that allotted for 2015, it’s $9.7 billion less than the president requested.