SANTA BARBARA--Newly released images of a pipeline rotted through by corrosion are raising new questions about the structure, which ruptured May 19 and spewed 101,000 gallons of heavy crude off the coast of Santa Barbara. 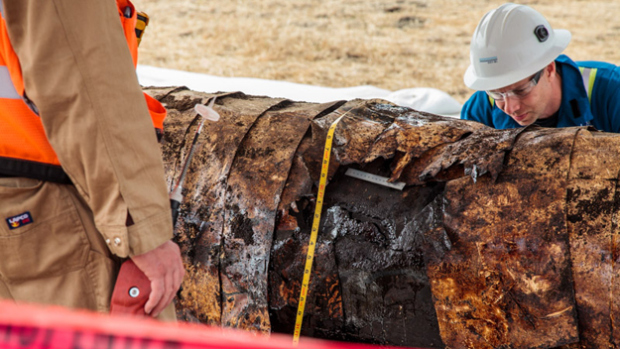 Br
Investigators examine a pipe that ruptured and dumped more than 100,000 gallons of oil off the coast of Santa Barbara on May 19.

The Houston-based company said had not received results of the inspection until several days after the pipe failed.

The company also said, however, that its testing showed thicker pipe walls than federal officials found. And the company's 1,200-page spill response plan called the odds of a rupture in the line "extremely unlikely."

In an Amendment to a Corrective Action Order of June 3, PHMSA cited "active external corrosion" and "general external corrosion" of the 10.6-mile pipeline. PHMSA reported that nearly half of the pipeline's wall had corroded in the area of the break, leaving just one-sixteenth of an inch thickness.

The failure site showed a rupture six inches long in the bottom quadrant of the pipe. The pipe wall was thinner than the company's inspection found two weeks earlier, PHMSA said.

The agency also reported that the line near the failure site had been repaired three times since a 2012 company inspection.

Those preliminary findings left PHMSA demanding more answers—and immediate corrective actions—from the company about the failed Line 901 and a nearby Line 903, which carries crude 128 miles from Santa Barbara County to Kern County.

The order mandates "immediate corrective action" by Plains "without prior notice and opportunity for a hearing," due to the "likelihood of serious harm to life, property, or the environment."

Those actions include, for Line 901: 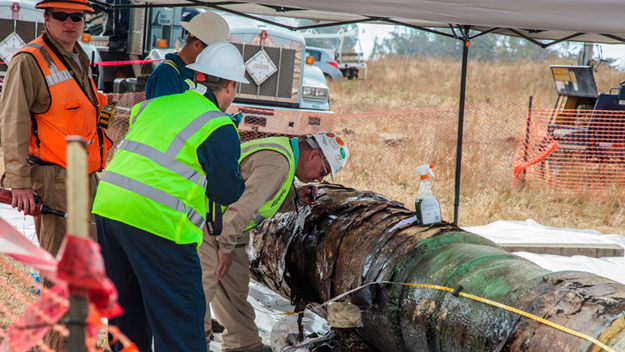 The order makes similar requirements on Line 903 but demands records dating back 10 years.

Pressure restrictions on both lines and additional training for personnel were also ordered.

Plains' spill-response plan, filed with the state and obtained by the Associated Press under the state's public records act, calls the chance of a spill remote.

“The pipeline and its operation are state-of-the-art,” the analysis says. “Spills are still possible, though extremely unlikely.”

Federal regulators endorsed the plan last year, but "the company is facing questions about whether it followed its own blueprint, or if it was outdated or inadequate," the AP reported.

The spill assessment "was initially conducted in 1994 and 1995, although sections have been modified as recently as last year," the report said.

The section of pipe that failed had been coated with a urethane and covered with foam insulation and an outer wrap. It was also shielded by cathodic protection.

The analysis thus concluded that the potential for a leak due to corrosion was "adequately mitigated."

The Face of Corrosion

The new photos of the failed line brought home the magnitude of the degradation in a way that the paperwork could not.

The photos were taken by Bruce Reitherman, Santa Barbara County's onsite environmental coordinator. The photos show major corrosion, an eight-inch hole created by the rupture, and oil-soaked rock and debris in the pipeline trench.