Door Handles Made to Combat Germs

PITTSBURGH—Some of the germiest surfaces in a building may be getting new protection from a novel coating that can knock out bacteria.

Two student scientists from Hong Kong have developed a new door handle that can self-sanitize with the help of UV light powered by opening and closing the door. 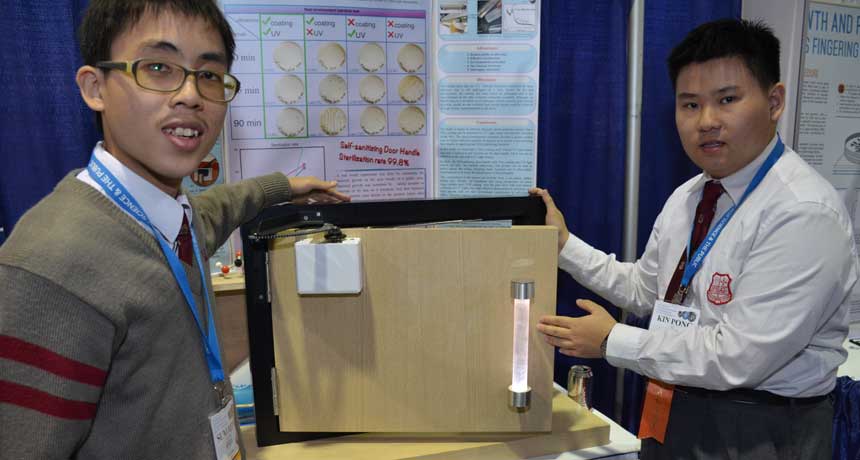 The pair recently showcased their handle at the Intel International Science and Engineering Fair, hosted by the Society for Science and the Public, in Pittsburgh.

The society announced the development Wednesday (May 27).

Door handles are some of the most germ-ridden surfaces on buildings. Bacteria and virus living on these surfaces transfer diseases, according to Wong.

Wong and Li wanted to design a coating for handles that would stamp out germs and help reduce disease transmission.

Their coating is based on titanium dioxide, a mineral widely used in paints and coatings for hiding, brightening and whitening. The compound is also found in food, cosmetics and other products.

However, indoor handles and those used at night are not exposed to such light. Thus, the students decided to light the door handle from within, allowing every part of the handle to experience the light and self-clean.

The components of the coated handle include a long cylinder of clear glass fit tightly into a bracket. Inside one end of the bracket is a strong light emitting diode (LED). The students also fashioned a small gear box that attaches to the door.

The UV light is powered by the opening and closing of the door, the students explain.

The door handle system would cost about $13 to build, the students have estimated.

Approximately 1,700 high school students from over 75 countries attend the fair and compete for $4 million in prizes.

Wong and Li were not the only students interested in curbing disease transmission through independent research. The fair’s first-place prize went to Raymond Wang, 17, of Canada, who engineered a new air inlet system for airplane cabins to improve air quality and knock out diseases.

In second place, Nicole Ticea, 16, of Canada, received a $50,000 award for developing an inexpensive, easy-to-use, disposable testing device to combat the high rate of undiagnosed HIV infection in low-income communities.