Solar Road Gets a Bright Start

Developers say the 70-meter-long route, from Dutch company SolaRoad, is the first electricity-generating road of its kind. More than 150,000 cyclists have traveled the road since it opened in November.

"We did not expect a yield as high as this so quickly," said Sten de Wit, spokesman for SolaRoad and a senior advisor at the Netherlands-based engineering firm TNO. 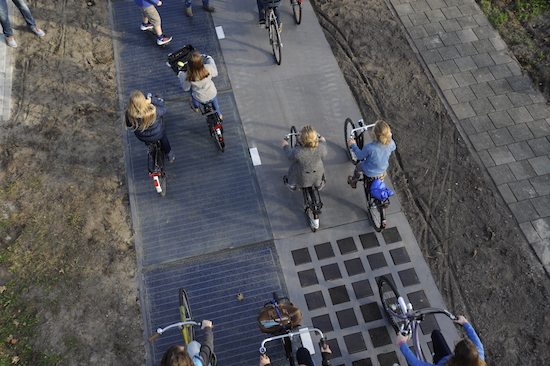 Photos: www.solaroad.nl
Solar cells are fitted under a centimeter-thick tempered glass in one lane and covered by a transparent, skid-resistant coating. No solar cells are embedded in the other lane, which is used to test various coatings.

TNO is part of a "golden triangle" of industry, research institutions and government collectively developing SolaRoad. Other partners are the Province of Noord-Holland, Ooms Civiel and Imtech.

De Wit says the road has generated more than 3,000 kWh since it opened. "This can provide a single-person household with electricity for a year, or power an electric scooter to drive 2.5 times around the world," he said.

Annualized, de Wit said, "we expect more than the 70 KWh per square meter per year, which we predicted as an upper limit in the laboratory stage."

The test road consists of concrete modules 2.5 to 3.5 meters long with a top layer of tempered glass.

In one lane, solar cells are fitted under a tempered glass about one centimeter thick and covered by a transparent, skid-resistant coating. No solar cells are embedded in the other lane, which is used to test various coatings.

Solar power from the road is fed into the electricity grid, where it can be used for street lights, traffic systems and households. One day, it may power electric cars that drive over it, the company said.

SolaRoad is in a three-year pilot that will include measurements and testing to inform future developments.

One goal of the field test is to detect and fix any early stage issues. For example, a small section of coating on the road delaminated at the end of December and early in the spring. Research has shown that large temperature fluctuations can cause local delamination due to shrinkage in the coating, the company said.

Repairs were made, and the development of an improved top layer is in an advanced stage.

Discussions about additional pilots are taking place with other provinces in the Netherlands, according to the company.