A New Makeover for 'Old Ironsides'

BOSTON—A few months shy of her 218th birthday, the world's oldest commissioned warship afloat has left the water for a multiyear restoration.

The USS Constitution entered dry dock Tuesday (May 19) at the Charlestown Navy Yard - Boston National Historical Park, marking the first time since 1992 that the ship has been dry-docked. 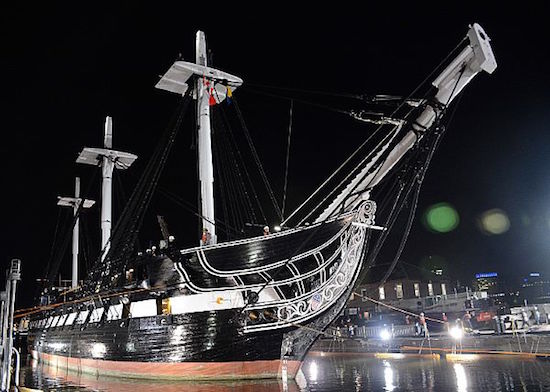 The restoration will last more than two years and is expected to cost between $12 million and $15 million, according to the Navy.

Restoration work will take place in the shipyard's Dry Dock 1—a historically significant structure built in 1827. Dry Dock 1 was one of the first two dry docks in the country, according to the National Park Service.

Restoration work will include:

"We couldn't have asked for better weather or better support from the dedicated team of professionals who helped with the docking," said Cmdr. Sean Kearns, USS Constitution's 73rd commanding officer.

"We're now positioned to carry out the restoration work which will return Constitution to the water preserving her for the next generation of Americans to enjoy and learn about our nation's great naval heritage," Kearns said.

Among those completing the complex work will be a group of craftsmen from Maintenance Detachment Boston, who have extensive knowledge of 18th-century shipbuilding techniques.

"We do work with modern tools, but we still use some of the old methods; the hull planks are still pinned through the deck but we use hydraulics and pneumatics to pull them out," explained Richard Moore, director of Maintenance Detachment Boston.

"Back in the day, if someone went down, they had someone to replace them. It's not so easy nowadays to replace a person with someone who is up to speed and knows what they're doing," Moore added.

He said his teams realizes the job is "a big deal," and they're all proud to work on the vessel.

The ship serves as a stark reminder of the importance of sound ship design, construction and maintenance, noted Vice Admiral William Hilarides, commander of the Naval Sea Systems Command (NAVSEA), which oversees the development, delivery and maintenance of the Navy's ships.

"When you look at what was cutting-edge Naval technology in the late 18th century, you can see Constitution's crews were equipped with the best tools in the world, which enabled them to achieve such a remarkable record of success in combat," Hilarides said.

Since 1907, the ship has been on display to the public.

"Her mission today is to preserve and promote U.S. Navy heritage by sharing the history of 'Old Ironsides' and the stories of the men and women who have faithfully served with distinction on the warship's decks for 217 years," said Sam Cox, director of Naval History and Heritage Command.

"When a visitor sets foot on the deck of USS Constitution, he or she is making contact with the beginnings of the U.S. Navy, a Navy that has kept the sea lanes free for more than 200 years. Keeping her ready to do so is incredibly important," Cox said.

Starting June 9, the ship will reopen to the public and remain open throughout the restoration. A third-floor camera from the Constitution Museum will provide a front-row seat to the restoration.

A blog, "Restoring an Icon," will document the rigorous work as it's performed.