CHICAGO—In an era where shortcuts have become standard, five industrial coating contractors have been honored for staying a safer course.

FCA International (formerly, the Finishing Contractors Association) presented the honorees with its CREST (Contractors Recognizing Excellence in Safety Training) Award. Winners of the fifth annual award were announced May 8 at the organization's Leadership Council meeting in Chicago. 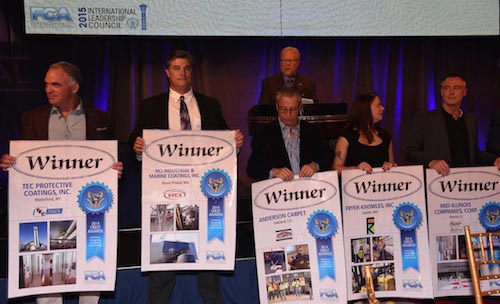 FCA is the largest community of finishing contractors in North America, representing more than 7,000 contractors.

A Priority on Protection

The awards were launched in 2011; winners "earn the right to say they are the safest contractors in their respective category," according to FCA.

"The FCA CREST Awards were created to encourage and recognize contractors who have led an effective safety program throughout the year," said Anthony Darkangelo, CEO of FCA.

"CREST Award winners have proven that protecting their employees is a priority at their company, and that they are a leader in construction safety."

The award criteria include:

FCA also recognizes entrants in the "Top 10 Finishers" category, which had 15 winners this year.

The industrial coating winners were:

Three others were recognized as Top 10 Finishers:

Honored in the Painting & Wallcovering category were:

Painters recognized as Top 10 Finishers were:

The winner of this year's Chairman's Award, for greatest improvement in a safety program, is T.J. Wies Contracting Inc., based in Lake St. Louis, MO.