Wage Theft at Home in Construction

AMHERST, MA—It's not fraud; it's a new business model.

That's the spin that experts are hearing amid the rising "epidemic" of wage theft in construction, a new study reports.

But that model is ripping off vulnerable workers, defrauding the government, burdening taxpayers, and threatening the livelihood of legitimate contractors who follow the law, the researchers add.

Getting Paid, or Not

Many workers—most often, immigrants hired by subcontractors—work for weeks without getting paid fairly, if at all, and are increasingly being misclassified as "independent contractors," the report says. 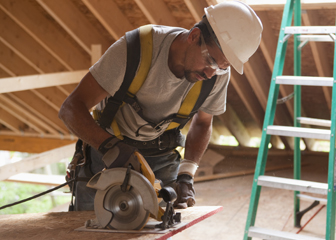 Employee misclassification has become a major concern at the federal level as well. The U.S. Department of Labor calls misclassification "a serious problem" that deprives workers of access to family and medical leave, overtime, minimum wage, unemployment insurance, and other benefits to which they are legally entitled.

The DOL has been working with the Internal Revenue Service since 2011 to crack down on the practice.

The Massachusetts chapter of Associated Builders and Contractors acknowledges that wage violations are a problem but says that most companies treat workers fairly, according to the Associated Press.

The study authors report that the recession has led to "distortion" in the residential building industry.

Many employers have responded to the financial losses by the “wholesale and illegal misclassification of their workers as independent contractors,” write Tom Juravich, Essie Ablavsky and Jake Williams of the university's Labor Center.

Contractors who misclassify workers as independent contractors are able to slash 30 percent off their labor costs, the report said, citing figures from the Department of Labor.

Misclassification yields “massive economic rewards” for employers, lower standards for workers and, though illegal, is becoming accepted practice in the industry, the study says.

"In the past 18 months, the attorney general has issued more wage-violation citations against employers in the construction industry than in any other sector—253 in all, resulting in more than $1.6 million being recovered in penalties and unpaid wages," the Boston Globe reports.

Still, official attempts to curb these practices have been ineffective, according to the study.

Not enough resources are allocated to enforcement; not enough cases are being investigated; and, when they are, the process may take one to two years, the report says.

p>Moreover, since many of the cheated workers are transient immigrants, they can be difficult, if not impossible, to track down when repayment is finally ordered, the report says.

Such factors have made wage theft and worker misclassification the new “regime” in construction.

p>“With only weak and ultimately ineffective regulations, a growing number of employers have built a business model based on wage theft by simply being willing to take the risk of getting caught,” the study says.

Without change, the new model will intensify and spread to other forms of construction, victimizing the largely immigrant workforce, according to the study.

p>Further, the quality of construction will continue to decline, delivering poor value to homeowners while saddling taxpayers with making up the lost revenue and the medical care of those not covered by workers’ compensation, the study notes.

The authors make several recommendations, including:

The study is based on 27 in-depth interviews with construction workers, contractors, homeowners, union staff and community organizers; it focuses on subcontractors who work with a national homebuilder, in the drywall industry, and at a community development corporation.