PALO ALTO, CA—Entombed by layers of mortar, paint and wax, a pair of 90-year-old decorative tiles has emerged during a building restoration project, according to reports.

One of the tiles depicts a U.S. Mail airplane and train; the other, a mail boat. 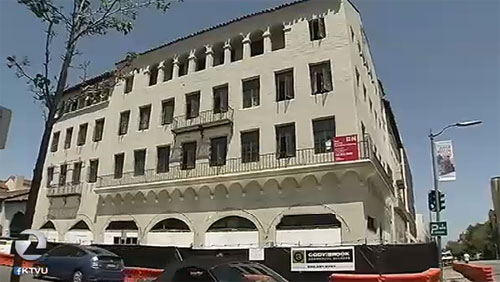 Screenshot KTVU
A restoration project in Palo Alto has turned up a piece of history covered for decades.

The building, which dates to 1929, was designed by local architect Birge Clark for use as a medical/dental center and post office. Until recently, it served as the Stanford University Art Center.

The tiles are believed to be designed after stamps from the 1920s, but further research is needed, officials say.

Palo Alto developer Roxy Rapp, whose company is restoring and expanding the structure, said he had made the discovery after studying the building's original architectural drawings.

On the facade, where the tiles once appeared, he observed a lump.

“The fellow, whoever did the replaster—whoever plastered over them—did kind of a lousy job,” Rapp told the local Fox News affiliate.

“You could sort of see the lump, the outline that there was still something behind there.”

So, Rapp hired Emeryville, CA-based Giampolini Courtney, a masonry restoration contractor, who was able to delicately chisel away the layers of mortar, paint and wax to uncover the artwork, according to Palo Alto Online.

“These guys are artists,” Rapp told Palo Alto Weekly, “…[T]hey’re like archaeologists that go into tombs and carefully relieve skeletons and artifacts. …You’ve got to have a whole lot of patience to do it.”

The panels, measuring two by two feet and made of 16 tiles each, have now been exposed.

Rapp says the team is going to apply a protective coating to the panels, to preserve them for another 90 years.

“It’s so neat to be able to discover something that…was covered up, and so I’m trying to restore it as much as I can,” Rapp told Palo Alto Weekly.

He also plans to look for other tiles that may have been covered up in the building’s entryway.

The Clark building is listed on the National Register of Historic Places.