Rukavina is accused of peddling PPG's process, suppliers, design specifications and materials data for manufacturing windows for military aircraft. Or, as one of his own 2014 email subject lines put it: "Complete Process, Materials and Costs for High Performance Plastic Casing." 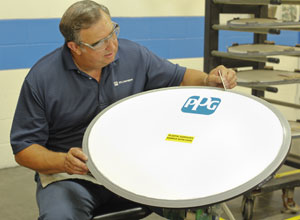 PPG Industries
Jimmy Black of PPG examines a window made of PPG's OPTICOR at the product's rollout in 2011.  Former project leader Thomas Rukavina is accused of selling the technology, which is potentially worth hundreds of millions of dollars.

The email references an attached PDF that details "equipment, materials, complete process, and costs" for making the sheets.

"I have more pictures and chemistry details in progress," writes Rukavina, a chemist and former leader of the project referenced. "This should be more than enough to get started. Maybe too much!!!"

Rukavina was arrested Thursday (May 7) at his home in the Pittsburgh area and appeared the next day in U.S. District Court in Pittsburgh on charges of theft of trade secrets.

WTAE.com reported that FBI agents searched Rukavina's home for nine hours after the arrest. A neighbor told the news outlet that Rukavina was planning to move to China in several weeks.

Rukavina faces up to 10 years in prison, a $250,000 fine, or both if convicted. A detention hearing on Monday (May 11) was postponed until May 26 after Rukavina's lawyer requested a psychiatric evaluation of his client.

In a statement emailed Tuesday (May 12), Mark Silvey, PPG's manager of corporate communications, said the company was "cooperating fully with the authorities as they conduct an investigation." The company called the investigation "ongoing."

Silvey added: "The proprietary research-and-development work done by our scientists brings great value to our customers, and ultimately impacts our position in the competitive marketplace.

"As a result, it is essential that we continue to safeguard and protect that intellectual property, and we thank the federal authorities who are assisting us in this effort.”

Emails obtained by the FBI and referenced in an agent's affidavit include detailed boasts by Rukavina about his former position, his information, and his connections to other PPG employees; his financial demands; and his complaints about PPG.

In another note, he detailed his work history, which allegedly included work with Coatings and Resins, the Chemicals Group, and other divisions across PPG.

"It is probably more than you need but I wanted to show you that I have very broad knowledge..." he writes.

The technology in question is called OPTICOR, which PPG Aerospace began developing in 2004 and unveiled at the Paris Air Show in 2011. Full-scale production began in 2012.

The technology "is the industry's first new transparent plastic in more than 50 years," and PPG was its first and only supplier, the company said at the time.

Beyond its immediate application for military aircraft, PPG foresees expansion of the product into other types of high-speed transportation, it says.

One technical report alone that Rukavina shared is "worth millions of dollars to PPG," the affidavit said. Every page of the report is marked "PPG Confidential," it notes.

At one point, Rukavina's Chinese contact asks directly if he is bound by a confidentiality agreement or other agreement that could violate PPG's Intellectual Property rights.

He responds, in part: "...When you join and when you leave PPG you are forced to sign these documents. Of [sic] you followed these documents as written you could never work again. I was forced out but did not sue. I signed a document stating I would not sue. If I did not sign instead of $100,000 in severance I would have gotten $18,000. If PPG owns my brain for life then they should pay me 2 million per year to keep it!! I think I made my point!!..."

According to the agent's affidavit, concerns were first raised by a PPG subcontractor who was approached in February 2015 by J.T.M.G. to make casting molds for use on high-speed-train windows.

J.T.M.G.'s representative, called "M.Z.," told the subcontractor, a machining and fabrication facility, that he was "well recommended by our friend in US."

When the sub requested more information from M.Z., he received an email from Rukavina, who identified himself as "Sr. Research Associate, PPG Industries."

Rukavina told the fabricator that "PPG is transferring the technology to" J.T.M.G. and offered drawings and other assistance to facilitate the sale.

'Hope I Did in a Legal Way'

Separately, he told M.Z. about the "Confidential" stamp left on the drawings sent to the fabricator, adding, "so my guess is that they will not make them for us. Someone else may."

M.Z. replies that she has stripped PPG's logo and name from the drawings ("Hope I did in a legal way").

The summary ends with M.Z. and Rukavina agreeing to wait for the fabricator's response.

On April 16, the FBI presented the documents in the case to a PPG executive, the affidavit says.