QUEENS, NY—After deteriorating for 50 years, a New York World's Fair landmark will get a new lease on life with a $3 million paint job—gratis.

The New York State Pavilion's Tent of Tomorrow, from the 1964 World's Fair at Flushing Meadows Corona Park, will be rehabilitated in a project undertaken by the New York Structural Steel Painting Contractors Association and the International Union of Painting and Allied Trades Local 806 District Council. 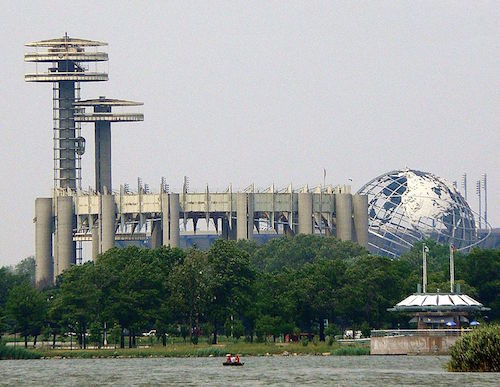 CC BY-SA 3.0 / Jbarta
"This is a labor of love for us," Kieran Ahern, president of the New York Structural Steel Painting Contractors Association, said about the pro bono job.

Designed by architect Philip Johnson, the Tent of Tomorrow measures 350 feet by 250 feet, with 16 100-foot columns suspending a 50,000-square-foot roof of multi-colored panels.

The paint job, which will be done by apprentices, is expected to extend the structure's life by 15 years, according to the New York City Department of Parks & Recreation.

New York SSPCA president Kieran Ahern said his father, Timmy Ahern, had had the idea for the free project, which has been in the works for four years.

"This is a labor of love for us," Ahern told the Queens Chronicle.

The elder Ahern told the Chronicle that he helped paint one of the fair's other pavilions before the fair opened in 1964.

"I couldn't stand to see the pavilion rotting away," he said. "When my son said his group was looking for a project to do for free, I suggested painting the New York State Pavilion."

The park was the site of the 1939-40 and 1964-65 World's Fairs. The latter fair's themes—"Peace Through Understanding" and "Man's Achievement on a Shrinking Globe in an Expanding Universe"—were immortalized in the design of many of the fair's pavilions, according to the NYSSPCA.

On June 7, NYC Parks will celebrate the 75th and 50th anniversaries of the two fairs.

Joe Ramaglia, business manager for IUPAT Local 806, said the apprentices were "very excited" about the project.

"It's been an eyesore for years," Ramaglia told the Chronicle.

The paint job will replicate its original color, "American Cheese Yellow." Work is expected to wrap up in the fall.

For the last few years, The Pavilion Paint Project, a volunteer group, has kept the exterior walls of the Tent of Tomorrow painted.

After taking office in 2014, Borough President Melinda Katz secured $5.8 million in funding to start electrical and structural repair work on the pavilion.

"We're working hard to save this architectural marvel, and the facelift is a great boon to our efforts," Katz said.

"We will restore this national treasure into a visible icon befitting 'The World's Borough' for generations of families and visitors to enjoy."